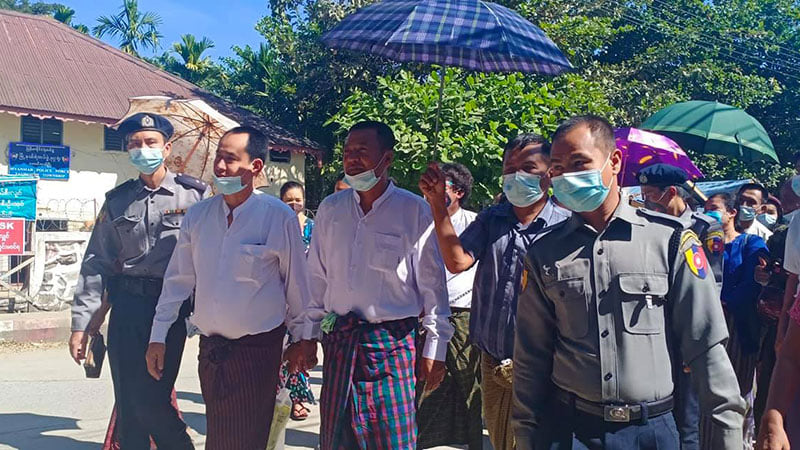 A court in Arakan State’s Taungup Township on Friday officially charged four men including a former municipal committee chairman under Section 52(a) of the Counter-Terrorism Law over their alleged ties to the Arakan Army (AA).

“The judge, citing the testimony of the plaintiff and prosecution witnesses, decided the four violated the law and asked us to explain why they shouldn’t be found guilty. We are collecting evidence to refute the argument,” said defence lawyer Daw Theingi Maung.

The court heard closing arguments in the case on February 17.

“I hoped my father and the three others would be released today. They didn’t violate the law, and I don’t want the public to think that they were charged because they are guilty,” said Ma Shwe Yi Myo Myat, the daughter of former Taungup Township development committee chairman U San Ngwe, one of the four defendants.

The vice chairman of the Arakan National Party in Taungup Township, U Wai Thaung, former township development committee chairman U Zeya Kyaw and his brother U Sithu Kyaw Zan, and U San Ngwe were arrested in May of last year over their alleged ties to the AA.

In June, Police Major Zaw Myint Tun of Sittwe-based Special Branch police filed a lawsuit against the four for allegedly supplying food to the Arakan Army, which Myanmar’s military has declared to be a terrorist organisation.

The next hearing is scheduled for March 3. If convicted, the four men face three to seven years in prison.

A total of 362 people were arrested on suspicion of having ties to the Arakan Army during the two years of fighting between the Tatmadaw and the ethnic armed group in Arakan State, according to data compiled by the Thazin Legal Institute.