Independent Journalists’ Force urges media to carry on despite bans 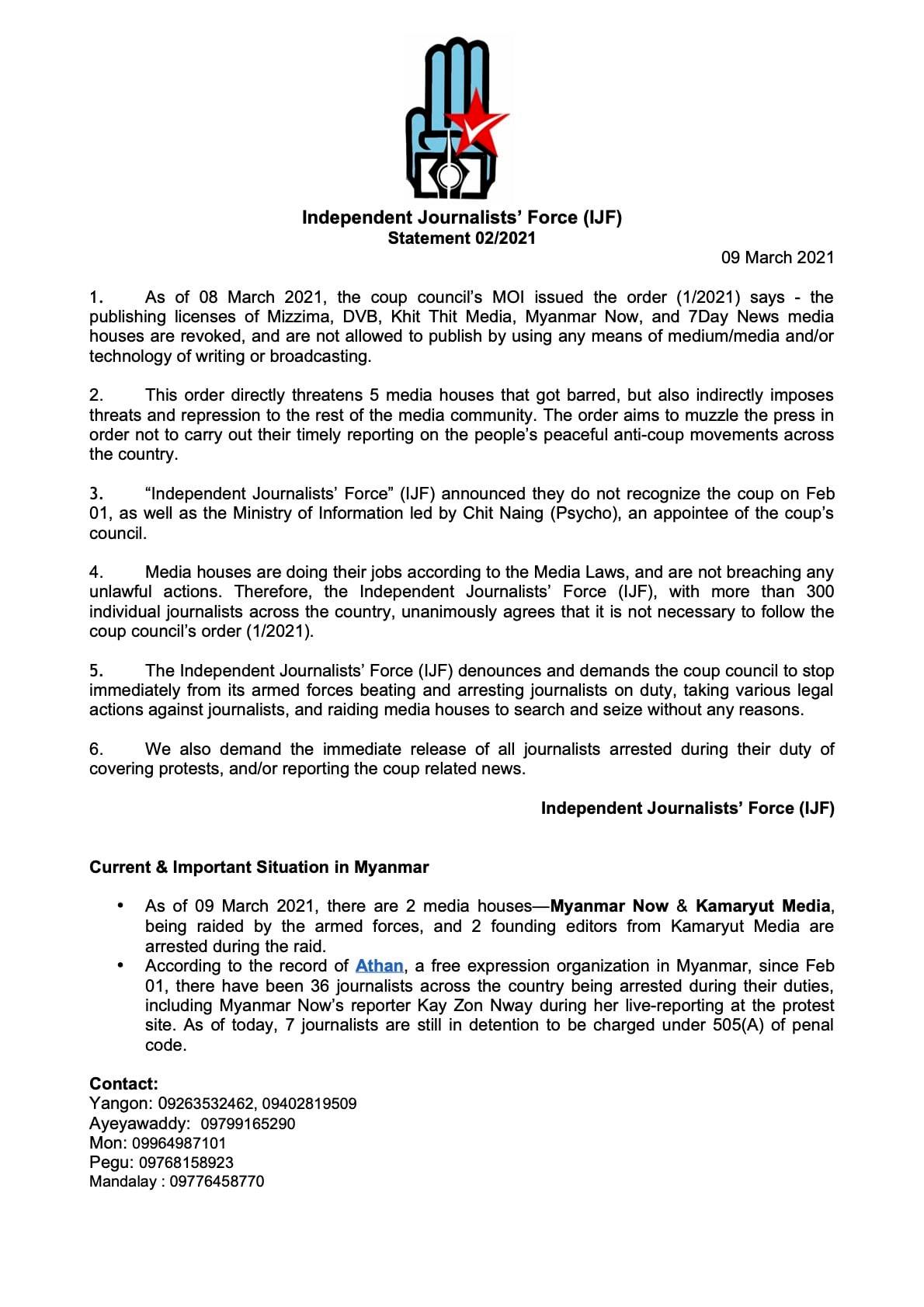 The Independent Journalists’ Force (IJF), describing itself as a recently formed network of more than 300 individual journalists, has rejected a recent junta announcement revoking the publishing licences of five prominent Yangon-based media outlets.

“This order directly threatens 5 media houses that got barred, but also indirectly imposes threats and repression to the rest of the media community,” the IJF said in a statement on March 9. “The order aims to muzzle the press in order not to carry out their timely reporting on the people’s peaceful anti-coup movements across the country.”

Refusing to recognise the military’s February 1 takeover, nor the military-run Ministry of Information under which the order was ostensibly issued, the new journalists’ network said it “unanimously agrees that it is not necessary to follow the coup council’s order (1/2021).

Effective March 8, the ministry said Myanmar Now, Democratic Voice of Burma, Khit Thit Media, Mizzima and 7Day News were “banned from publishing or broadcasting with the use of a kind of media or technology” following the revocation of their licenses.

Both Myanmar Now and DVB have had reporters arrested in recent weeks.

“I want to say, you keep on doing your work. You do not need to be afraid,” said the manager of the IJF’s Yangon Region office. “If printing is not allowed, you can report through social media networks. People are hungering for news and they are consuming news through social media platforms. So, you keep reporting without fear.”

Following the ministry’s announcement, Mizzima wrote on its Facebook page: “We will continue against the military coup and will stand as independent media to restore democracy and human rights in Myanmar.”

Citing the freedom of expression advocacy group Athan, the IJF said since February 1, 36 journalists were arrested across the country for covering protests against the military’s State Administration Council or otherwise being engaged in their work, and seven remained behind bars as of March 9.

“The journalists are working in line with media ethics and faithfully on the job. So, people and the military council need to understand it,” the IJF’s Yangon office manager said.

Khit Thit Media, which was granted its license in 2018, wrote on its Facebook page: “We’d like to announce that the chief editor and founder of the Yangon Khit Thit will not follow the unofficial order of the illegitimate military coup council, and we will remain operating, doing the work of a media outlet as well as standing with the people to eliminate the dictatorship.”