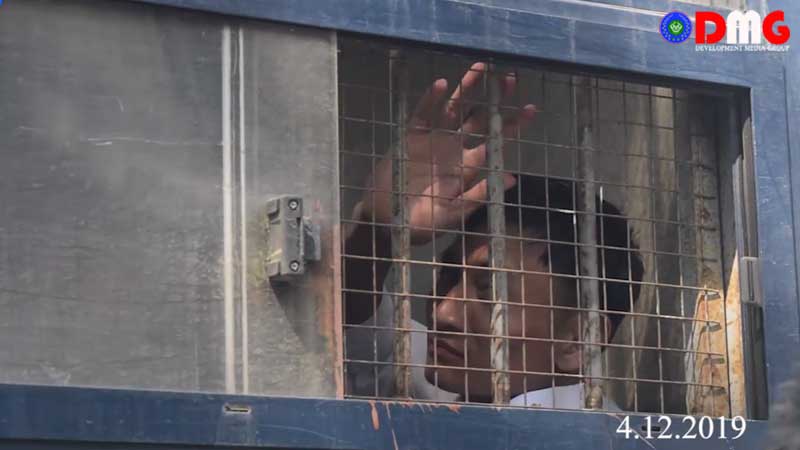 Relatives of detainees charged under the Counter-Terrorism Law over alleged ties to the Arakan Army (AA) are expecting the release of the accused as Myanmar’s military regime has removed the Arakanese rebel group from its list of terrorist groups.

The Central Committee for Counterterrorism and military-controlled Home Affairs Ministry on March 23, 2020, declared the Arakan Army to be a terrorist organisation and unlawful association.

It is widely expected that dozens if not hundreds of people charged under the Counter-Terrorism Law over alleged AA ties will be released in the wake of the de-designation.

“We expect that our son would be released as the State Administration Council has removed the AA from the list of terrorist organisations. He is innocent and I would therefore like to ask for his release,” said Daw Ni Ni Aye, the mother of a detained Kyaukseik villager in Arakan State’s Ponnagyun Township.

The military arrested 38 residents of Kyaukseik village on April 19, 2020. It subsequently released 33 villagers, but five remain in custody.

After video of the five detainees being beaten by military personnel went viral on social media, a military investigation confirmed the incident, with the Tatmadaw vowing action would be taken against the personnel involved.

A captain of Ponnagyun-based Light Infantry Battalion No. 550 nonetheless filed a lawsuit against the Kyaukseik villagers under Section 50(j) and 52(a) of the Counter-Terrorism Law. Facing trial, they have been behind the bars for about 10 months.

The deputy commander of LIB No. 550 attended a recent hearing at the Sittwe Township Court, and said the five would be released because he had signed documents at the court declaring their innocence.

“Why are they still detained if they are innocent? I want to take my son back. I don’t want to let him stay in prison for even a second longer,” Daw Sein Win, the mother of another detainee, told reporters at the court hearing on Friday.

Seven out of nine prosecution witnesses have testified in the case of the five Kyaukseik villagers, and two remaining witnesses are slated to testify at the next court hearing on March 19.

The cases of those charged with Counter-Terrorism Law offences must be dropped in accordance with the law because the Arakan Army is no longer designated as a terrorist organisation, said lawyer U Kyaw Nyunt Maung.

“The prosecution has to drop the cases, as the charges are based on terrorism. If the Arakan Army is delisted as a terrorist organisation, they [the accused] can no longer be suspected of terrorism and [authorities] will have to drop their cases,” the lawyer explained.

A total of 362 people were arrested on suspicion of having ties to the Arakan Army during some two years of fighting between the Tatmadaw and the ethnic armed group in Arakan State, according to data compiled by the Thazin Legal Institute.