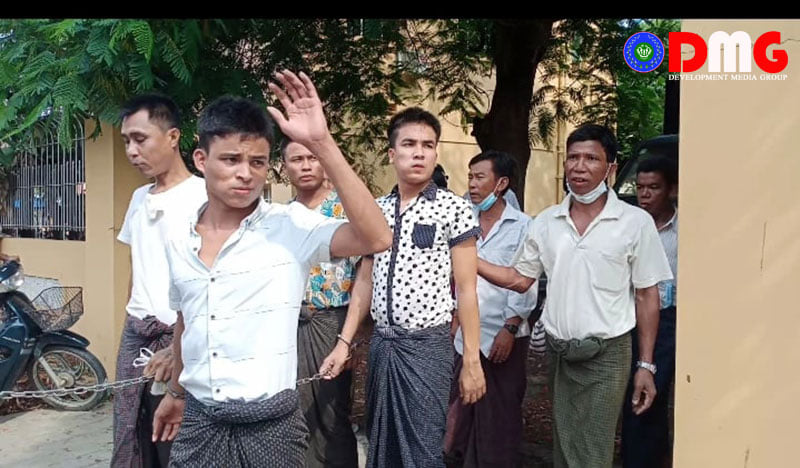 The Sittwe District Court has postponed hearing the cases of Kyaukseik and Lekka villagers who were charged under the Counter-Terrorism Law to April 23, after the prosecution witnesses failed to show up at a court hearing on Friday.

Myanmar’s military arrested 38 people from Kyaukseik village in Ponnagyun Township in April 2020. It subsequently released 33 villagers, but charged the five others under Section 50(j) and 52(a) of the Counter-Terrorism Law on suspicion of having ties to the Arakan Army (AA).

There are a total of nine prosecution witnesses in their case and the court has so far heard eight of them. The ninth prosecution witness is unable to come to the Sittwe District Court to testify and will be heard by a commissioner, said lawyer U Kyaw Nyunt Maung.

“Questions have been sent to the concerned court and the witness will be heard by the commissioner there. After the hearing, his answers will be sent back to Sittwe District Court. The court will then proceed with the case,” said U Kyaw Nyunt Maung.

Meanwhile, more than 20 residents of Lekka village in Mrauk-U Township who were arrested in April 2019 — also on suspicion of having ties to the AA — have been on trial for two years. Authorities have charged them under Sections 50(a), 50(j), 52(a) and 54 of the Counter-Terrorism Law.

It was widely expected that dozens if not hundreds of people charged under the Counter-Terrorism Law over alleged AA ties would be released in the wake of the de-designation.

People facing prosecution under the Counter-Terrorism Law will, however, still have to stand trial, according to the spokesman for the Arakan State Administration Council and military-appointed attorney-general of Arakan State, U Hla Thein.

The prolonged nature of several trials, notably the two-years-and-counting ordeal of the Lekka villagers, has imposed financial burdens on relatives of the accused.

“Previously, I sold my gold items to pay the costs to attend the trial of my son,” said Daw San Thar Nu, the mother of 24-year-old Ko Oo Hla Maung, one of the accused from Lekka village. “However, all my belongings have gone now, and I am in debt. I can’t even afford to go to trial now. I hope they are released as soon as possible.”

More than 200 people were arrested and charged under the Counter-Terrorism Law on suspicion of having ties to the AA during some two years of fighting between Myanmar’s military and the ethnic armed group in Arakan State, according to data compiled by Thazin Legal Institute.