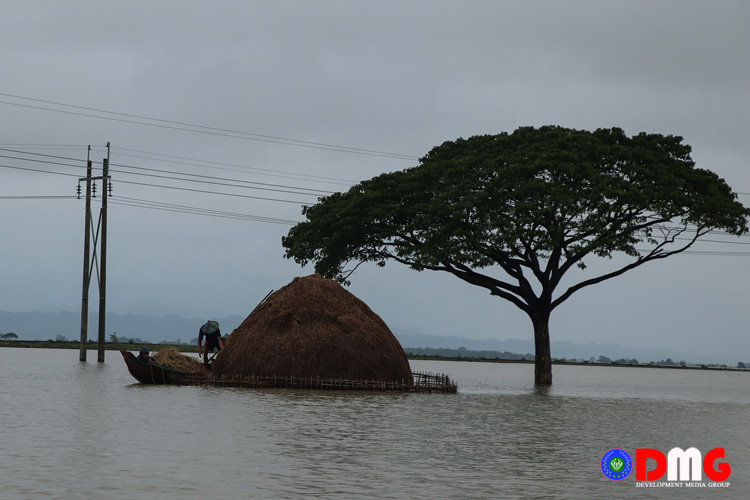 Since floods hit some townships in Arakan State recently, nearly 70,000 acres of farmland in Kyauktaw, Mrauk-U, Ponnagyun and Minbya townships were destroyed, according to figures of the Arakan State Farmers’ Union.

The six-day flooding in the region destroyed over 10,000 acres of paddy filed in Ponnagyun Township, according to the union.

The flood affected about 20,000 acres in western Mrauk-U Township and about 5000 acres in Minbya Township.

The recent devastation during the flood could lead to rice shortages and it could be more difficult in the coming year, said the chairperson of the Arakan State Farmers’ Union.

“We have already announced that paddy cannot be grown in about 100,000 acres of land due to armed conflicts and the curfew order. Now, the flood hit the four out of seven townships in northern Arakan State. So, I am sure farmers, especially from the flood affected areas, will have a very hard time to do cultivation next year,” said U Kyaw Zan, the chairperson of the Arakan State Farmers’ Union.

He added that self-reliant farmers might face inconveniences to do cultivation again on the damaged farmland.

Since farmers have been encountering challenges due to conflicts and floods, the regional government needs to provide aid for them, U Kyaw Zan said.

“The future of our region is hopeless now because natural disasters hit our region which is poor. So, I wish authorities could provide aid to our people as much as they can,” the chairperson said.

The flood subsided in Kyauktaw, Mrauk-U and Minbya townships currently but people whose houses were destroyed during the flooding and from areas where drinking water wells were tainted are still suffering difficulties.