Arakan State sees pro-military rallies, and opposition to them, ahead of coup’s anniversary 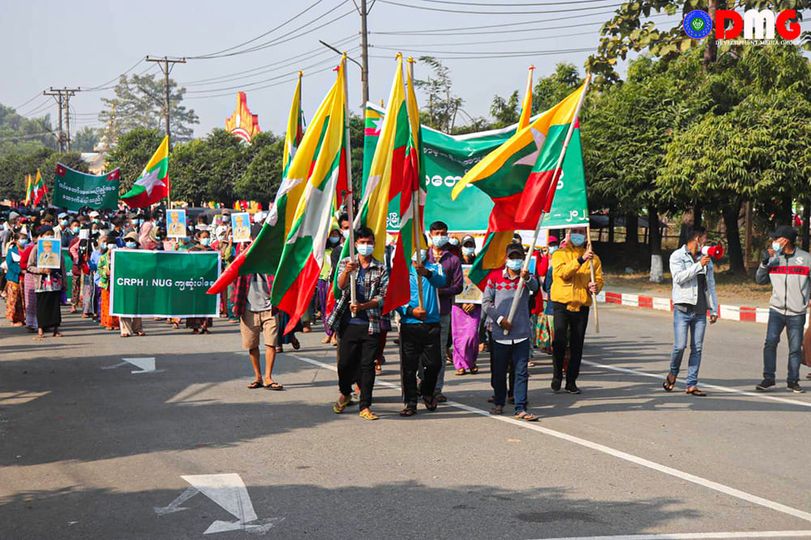 Military veterans and their family members held pro-Tatmadaw rallies in several Arakan State townships on Monday, but disapproving residents in the state say the demonstrations were not reflective of broader regional sentiment.

“No locals were seen participating in these pro-military rallies,” according to Ko Min Bar Chay, a local human rights activist. “They [military officers] are working to lift the spirits of family members of the military. You can see how much the locals are criticising this kind of pro-military rally on social media.”

The rallies were organised by family members of military personnel and veterans, one participant in a Sittwe rally confirmed.

“This is to show that the military is strong, in the context of the current political situation,” said U Khin Hlaing, a Tatmadaw veteran from the Arakan State capital Sittwe’s Aung Mingalar ward. “I also participated in the pro-military rally, as assigned by the relevant township officials.”

Participants in Monday’s pro-military rallies denounced the Committee Representing Pyidaungsu Hluttaw (CRPH), National Unity Government (NUG) and People’s Defence Forces (PDF), and proclaimed their support for the Myanmar military and the State Administration Council (SAC), as the junta refers to itself.

“Around 100 people held a pro-military rally this morning and no locals took part in the rally,” said a resident of Maungdaw town who asked for anonymity. “I don’t know whether the participants in the pro-military rally were forced to do so for money.”

Ko Tun Kyi, a resident of Kyaukphyu town, said that instead of taking to the streets and holding rallies in apparent support of the current political crisis, concrete plans ought to be drawn up. He added that no one locally would be interested in such military support from military families.

U Pe Than, a former Arakan State lawmaker from Myebon Township, said pro-military rallies are being held in many parts of the country, but in Arakan State — where there are no appreciable anti-regime forces or civil disobedience movement (CDM) participants — this is not necessary.

The rallies were held in the wake of anti-junta groups calling on people to take part in a “silent strike” marking the one-year anniversary of the military coup on February 1. The junta has distributed leaflets warning locals in Arakan State to refrain from participating in such activities.

U Oo Tun Win, another ex-MP in the Arakan State legislature, also sought to distinguish the situation in Arakan State from that of the rest of Myanmar.

“I think it should be considered as a separate political environment within the Union of Arakan State,” he said.