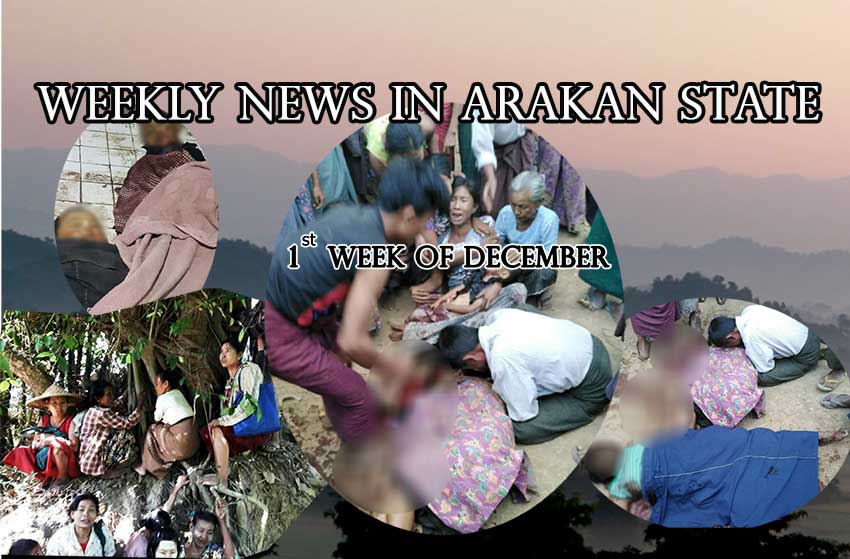 Five people receives injuries after an artillery shell landed in Shar Shay Byin village, Mrauk-U Township on Sunday morning. The injured are Maung Aung Phyo Htet, 2, Maung Htay Than Zaw,10, Ma Hnin Nwe Than, 12, Ma Aye Kyi Htay,22, and Ma Than Nyunt Htay,25. Family members said that the artillery shell was from the Tatmadaw. The Tatmadaw said that it did counter attacks against the AA, but people don’t know who is responsible for the collateral damage.

1. Two children and a woman were killed and six injured following an artillery shell landing in Alae Zay ward in Mrauk-U city on the afternoon of 2 December at about 4:30 p.m. Some local people said that the artillery shell was launched by the Light Infantry Battalion 540 based in Mrauk-U. However, the Tatmadaw said that the explosion was due to someone tampering with an old explosive device with a stone.

3. A Muslim man, identified Baw Chi Ar Maw, 24, from Thayet Pyin village in Buthidaung Township stepped on a landmine while he was herding cattle near the village. The blast occurred on the morning of 2 December at about 11 a.m. His left leg was severed and the other leg received severe injuries.

1. A nine-year old student from Kyauktaw town, named Maung Kyaw Min Myat, was killed by a stray bullet on Friday morning at about 9 a.m. Family members said that the stray bullet came from an attack by government troops.

The Tatmadaw responded by saying media outlets reported that it reacted to an RPG attack carried out by the AA on military troops while they were orchestrating regional security exercises. The death might have occurred during the exchange of gun fire.

2. A woman from Paik Thay (Muslim village) in Kyauktaw town received a bullet injury on her waist on 6 December.

The Tatmadaw and police force checked Kone Dan village in Rathedaung Township on Tuesday and arrested teacher U Kyaw San Naing, 34, and school’s clerk U Nay Zaw Tun, 28. They have been detained in Maungdaw police station for interrogation, family members said.

Ma Hnin Zar Phyu, wife of AA chief Major General Twan Mrat Naing, and Saw Pyae Shi,11, and Myat Linn Zan, over one year old have been arrested by the immigration department in Chiang Mai, Thailand, on 4 December when they came to extend their visa.

The Arakan Army (AA) announced that the Tatmadaw and the AA have been fighting in Rathedaung, Buthidaung, Mrauk-U, Myebon and Ponnagyun Townships from 1 to 7 December.

(Compiled by the DMG News Desk)