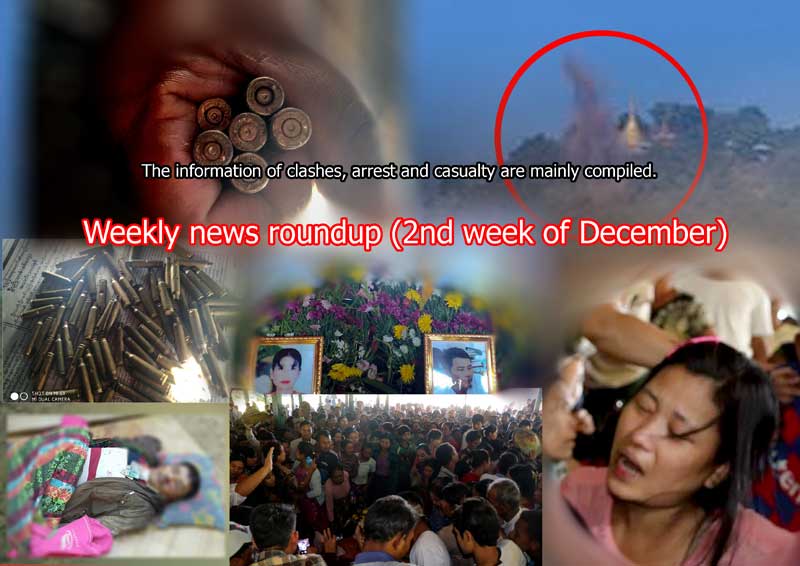 The ongoing armed conflict claimed five civilians and hurt 19 others between 8 and 14 December. Another 10 people have been detained during that period. Fierce clashes broke out in Minbya and Myebon Townships and a police station was attacked.

A Muslim woman from Kyar Nyo Pyin Village of Buthidaung Township received an injury from pieces of shrapnel.

A passenger vessel in Kaladan River was hit by an artillery shell near Nonebu village, Chin State’s Paletwa Township, killing two people and injuring another six people. The Tatmadaw alleged that the heavy weapon was launched by the Arakan Army but the AA has accused the Tatmadaw.

1. An artillery shell landed in Kalama Taung village in Minbya Township, ten villagers received injuries. Two of them are serious.

2. Village administrator U Nyan Thein and Daw Phyu Phyu Win were shot dead by the Tatmadaw in Satetara village, Minbya Township on Wednesday night at about 11 p.m., family members said.

The Tatmadaw also shot and abducted U Kyaw Aye Maung, administrator of Kyauk Maw village who was reaching Satetara village and his body was found at the bottom of Mt. Min Phoo, west of Thalu Chaung village in the evening of 14 December, at about 4 p.m., family members said.

A statement released by the Tatmadaw said that it returned gunfire after the AA instigated a shootout from a house. The military column checked the house and found that U Nyan Thein and U Kyaw Aye Maung were dead from bullet wounds. The statement did not say about the death of Daw Phyu Phyu Win.

1. The Tatmadaw arrested a resident from Nan Kya village, Mrauk-U Township on 11 December. He was shot, then arrested. The Tatmadaw accused him of having affiliations with the AA, but local residents said he has a mental illness.

2. The Arakan Army arrested U Ye Thein, chair of the National League for Democracy (NLD) for Buthidaung Township, Arakan State on 11 December. The AA said that it arrested him for arranging a rally to support Daw Aung San Suu Kyi who defends Myanmar at International Court of Justice.

3. The Tatmadaw arrested seven local people from Satetara village, Minbya Township, on 11 December on suspicion of having ties with the AA.

A person with mental health problems from Kyauk Yan village, Rathedaung Township, was arrested by the Tatmadaw on 14 December, according to family members.

The AA attacked the Yoetayoke village police station in Ponngyun Township on 11 December.

Note: From 1 to 7 December, four people killed and 16 others injured. Five other civilians were arrested.