Carving Out a Niche in Ancient Mrauk-U 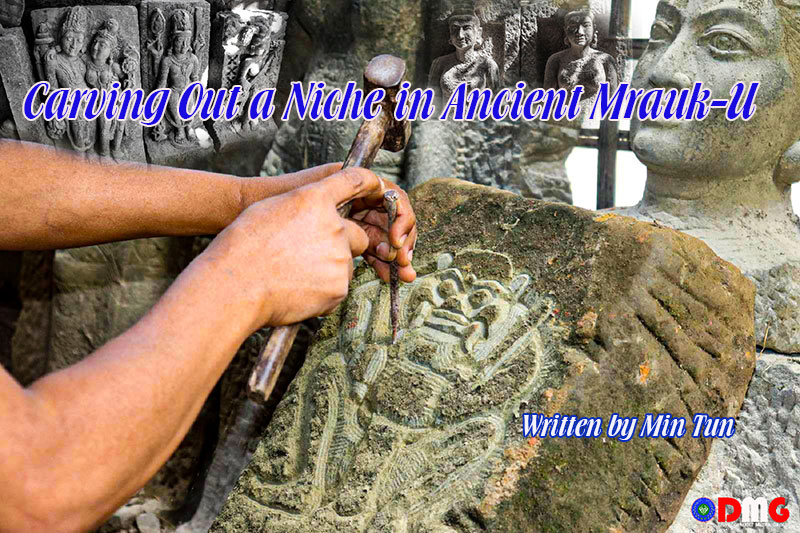 As soon as you enter 53-year-old U Hla Gyi’s courtyard, you can feel the gaze of his stone carvings. The assembled courtyard collection in Mrauk-U includes statues of the Buddha, deities, giants, byala (a creature from Arakanese mythology), and other representations from the tales of old.

U Hla Gyi comes from a farming family, and says he has dedicated his life to stone carving. Mrauk-U is a good place to be, then, as remnants of the ancient city offer some of Myanmar’s best examples of stone carving and sculptures that are hundreds of years old.

When he was young, he used to look at Shit Thaung and Koe Thaung temples in Mrauk-U and draw portraits in sketchbooks. Following his passions, U Hla Gyi studied painting and other forms of art one by one.

When U Hla Gyi got married, he gave up his hobby and worked on his parents’ farm to support his family. He had three children by age 30. U Hla Gyi eventually abandoned farming as he was unable to provide for his family and instead pursued a career as a sculptor. “I chose the right path to do this job and went through it despite the difficulties,” he said.

When he started his business, he found it difficult to sculpt almost all of the statues. However, U Hla Gyi said that he overcame the challenges because he worked hard at it.

“Despite the difficulties, I decided not to do anything other than this job, so I was no longer depressed. I sometimes borrowed money from others to buy food and repaid the debt when I earned income,” he recounted.

The late U Shwe Gyi Thar, an artist from Lat Kauk Zay ward in Mrauk-U, was U Hla Gyi’s stone-carving mentor. These days, U Hla Gyi also carves wood.

“My family never did any carving work, but I was interested in it, so in the past I believe that I was one of the stone sculptures in Mrauk-U,” he said.

U Hla Gyi has been making a living from stone carving for more than 20 years now. He has also been able to pass on knowledge to others who are also interested in stone sculpture. He is currently a member of the Myanmar Paintings and Sculpture Association (Central).

U Hla Gyi’s sculptures are so well known that orders have been placed by customers not only from other townships in Arakan State but also from Sagaing, Ayeyawady and Yangon regions, Shan State, and other areas.

“The bigger the sculpture to be carved, the more revenue,” said U Hla Gyi.

Visitors who are especially enamoured of Mrauk-U’s ancient stonework have been known to ask local sculptors to make them replica statues. The number of domestic and foreign tourists to Mrauk-U has decreased since the end of 2018, however, due to armed conflict between the military and Arakan Army, and the Covid-19 pandemic. As the tourism industry came to a standstill, the sculpture industry also suffered.

“In the past, the tourism industry was good. Hotels ask me to make the sculptures they want. Now the orders are declining,” U Hla Gyi said.

Among the best-selling stone carvings are of the Buddha statues, deities, Byala, and giant Rakshasa.

Sculpting (panbu) and stone sculpting (pantamault) are two of the 10 traditional Myanmar arts.

Among his goals and hopes for the future, U Hla Gyi is determined to carve stones for the rest of his days on this earth, and he wants his family to inherit the art of carving.

Another goal? “I want to create a gallery in Mrauk-U to showcase a large number of traditional Arakan sculptures from the four eras of the Arakan period,” he said, “for future generations.”