IDPs in need with rainy days ahead 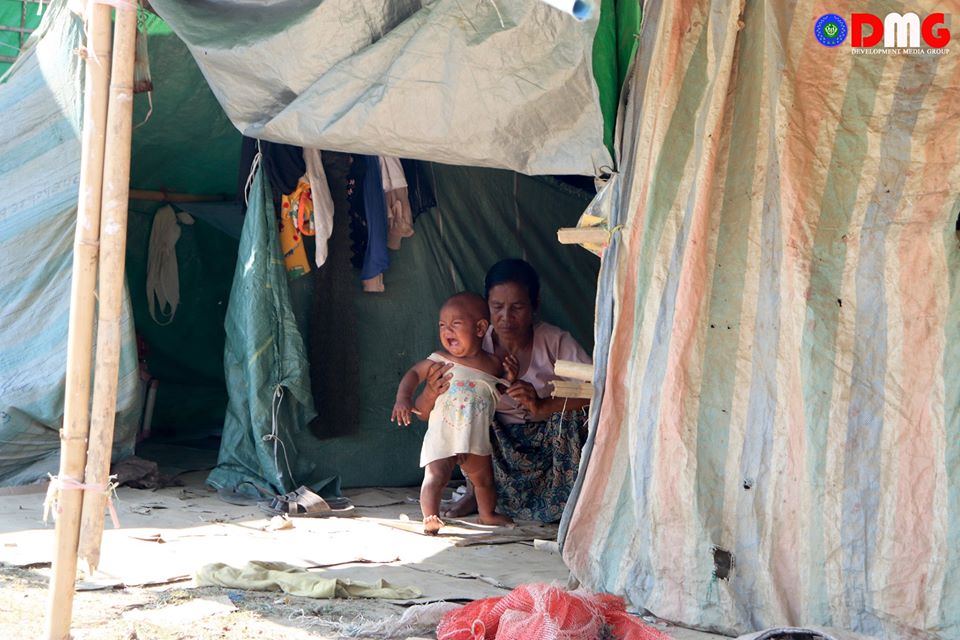 More than 164,000 people have been displaced by conflict between the Tatmadaw and the Arakan Army (AA). The fighting has lasted well over a year and seems to be taking on an ever-increasing ferocity, yet the military’s designated ceasefire does not include Arakan State. With no end to the war in sight, the numbers of civilians killed, wounded and displaced will continue to mount.

Shooting, shellings, and fear have forced many from their homes. Yet harsh and difficult conditions await, as internally displaced people (IDPs) are forced to seek refuge in poorly built shelters, schools and monasteries.

With the monsoon season upon us, the difficulties are accentuated because the rains to come make for an additional burden on daily life. Amid the water and wind, basic activities become major challenges — cooking, eating, sleeping; all of these things are not to be taken for granted in a shelter that leaks or is buffeted to the point of breaking. The result is a population more prone to hunger and sleep-deprivation.

For the “lucky” IDPs who have taken refuge at schools, the academic term begins soon, meaning those who have been living in classrooms will be forced to find alternative accommodation. Yet many of the camps are already full and there are reports that new arrivals will not be readily accepted. In some places, the government has prohibited the establishment of new camps, ordering any construction to be halted on the grounds that it was unauthorised.

Last year the government began constructing temporary shelters for IDPs, but only a small proportion of Arakan State’s displaced population currently live in these government-built camps. So that raises the question, is that it? Is that all they are going to build? That can’t be it. In consultation with the IDPs, consideration needs to be given as to where and how temporary structures should be constructed. Only then can the needs of displaced people be accommodated.

IDPs across Arakan State hope to secure sturdy, satisfactory shelter ahead of the onset of monsoon season proper. So far that dream has not been realised. Some have been displaced from their homes since late 2018, and the dwellings they live in are by now dilapidated and wanting. There is much repair work and renovation to be done before IDPs will feel safe at many of the camps. Material support and helping hands must be provided, and quickly, to those temporary settlements that lack sufficient shelter.

The war in Arakan State is detrimental to all people living in the affected region, but at this change of seasons, it is the IDPs who face a more pronounced hardship than the average resident. DMG believes that the efforts of government, civil society, and individual and international donors should thus be coordinated and commensurately focused on aiding and readying them in the weeks to come for the rains of the months to come.