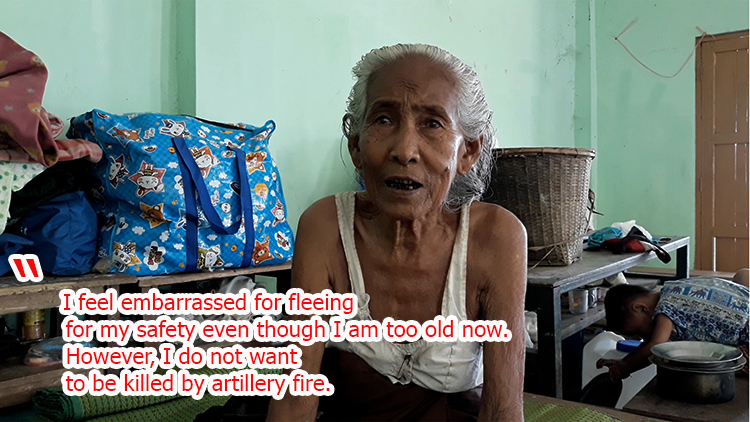 Five people from Si Taung village in Buthidaugn Township were killed when artillery shells landed in the village on the night of March 21. Daw Aung Ma Oo, 86 years old, who has been displaced from her home from Kan Pyin village, was in a bomb shelter in Si Taung village on that night. She believed that she escaped from death. She is now taking shelter in Zeditaung refugee camps with her son. Nyo Tun, a reporter from the DMG, visited and interviewed her on April 21.

Q: How did you arrive the Zeditaung IDP camp?

A: Fighting broke out in our village. Since the beginning of the fighting, bullets and heavy weapon shells landed in our village. Whenever gunfire breaks out near our village we are affected. Nwayone Taung or Nga San Baw or Sapahta, villages also receive artillery fire. If the Myanmar Army opened fire from their side, shells and bullets end up in our village. No one was hit in the village, but we fled for our safety. Monks also fled from the monastery because an artillery shell landed near the monastery and destroyed a fence. Our village, named Kan Pyin, is located near a mountain, shells and bullets from all four sides landed on the village. So we all had to flee.

A: Oh, dear, my health is not in good condition. I cannot see and my hearing is a bit impaired. I can only eat small amount of rice also.

Q: Did you go back your village during the water festival?

A: I did not. I had to enjoy the festival here.

Q:  How do you feel about living here? Does it make you feel at home?

A: People here help us to feel at home as much as they can. The village administrator is also good. Aid workers come and provide food and small money for us. We can enjoy our regular meals. But we do not have enough money to buy snacks or tea or betel squad. Sometimes, we are provided curries from the refugee camps. But it is not enough for all of us. I sometimes want to buy curries, but I do not have enough money.

Q: Do you know who are fighting here?

A: I heard that the AA and the Bama Army are fighting. I can’t hear very well so I know a little about it. I can hear if someone talks very close to me.

Q: Did you flee from your place in the past?

A: Yes, I did. When I was 16, it was during the Anti-Fascist People’s Freedom League era. Villagers took shelter on vacant land which is now used as a market in Oat Phoe village. All the people who were living near a mountain were evicted. It was in November and paddy fields were nearly harvested. Groups of people from different villages had to stay under mango trees for two weeks.

Q: Do you hear the sound of gunshots?

A: I heard many rounds of gunfire in Si Taung village. It felt as if the earth was rocking.

Q: Were you in Si Taung village at that time?

A: I was not in the village. We were are living in Si Taung refugee camps. But other villagers went back home in the evening. I cannot go back every day. So, I stayed in the camp. On the third day I stayed at the camp, I heard the sound of gunfire. I believe in the nine qualities of Buddha. They shot guns constantly. I crouched down on the ground. Whenever I heard a burst of gunfire, I thought that a part of my body was torn off. This was the first time in my life I experienced this. I am startled now when I see a person with gun.

Villagers fled to Sin Khone Daing village the next morning. We were dirty and caked with mud. I returned home but there was no one in the village. My son was sitting at the jetty with his two children because there was no room for them on the Honda motor boat to go to Sin Khone Daing village. We could come here after we phoned our relatives in the village.

Q:  Which period is more frightening when you fled your home: the AFPFL era or this time around?

A: Under the AFPFL era, we were forced by authorities to leave that area. If we stayed there, we would have been killed. Since we are afraid of authority figures, we fled from the area.

Q: When will you return home?

A: We have plan to return home, but we are not sure we should return home at the end of this month or early June. We were shocked during the gunfire in Si Taung village.

Q: Do you want to talk about the situation that forced you to flee from home when you were in your 80s?