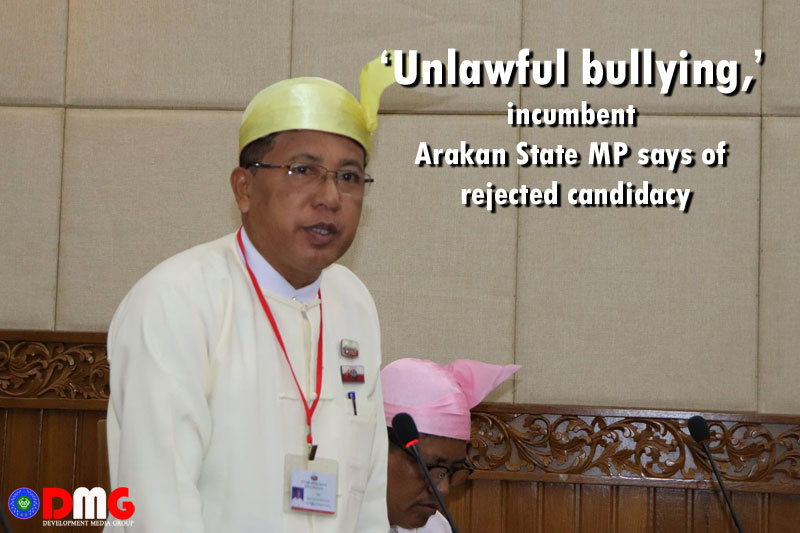 Sitting Arakan State lawmaker U Poe San from Kyaukphyu Township is not likely to defend his seat in this year’s general election, after election officials rejected his candidacy on the basis of his son’s alleged links to the Arakan Army.

U Poe San’s son Aung Myint Soe is a former major in the Myanmar Army who stands accused of defecting to the Arakan Army in 2018.

Question: Could you explain the rejection of your candidacy?

Those of the district subcommission informed me about getting a message on an objection of the Ministry of Home Affairs against me sent by the Union Election Commission. They read a letter to me. I demanded the letter. They refused to give it to me. I demanded the letter number. They also refused it because it was at secret level. The letter mentioned that Major Aung Myint Soe, son of MP U Poe San, committed ‘absent without leave’ from the military in March 2018. As the Ministry of Home Affairs conducted an investigation into the case, it was reported that the major joined the Arakan Army. As such, U Poe San got entangled with Section 10(n) of the Election Law, so I was informed about the cancellation of my nomination for the MP seat.

Q: Will you appeal the rejection of your candidacy?

A: I told the district subcommission, if anyone objects to me, I will appeal to the State Election Subcommission. They told me I should not appeal and not to submit an appeal to the district as well as the state [subcommissions]. It is because as it was sent by the Union Election Commission, I must contact the UEC. So, I sent a letter to the UEC on August 24 to be able to approve my nomination. The UEC replied to me on August 27 that as I did not appeal at the State Election Subcommission during the set period, the decision of the district commission was approved. That is why the nomination of U Poe San was cancelled.

Q: How do you feel about the rejection on these grounds?

A: I was confirmed as a nominee to run in the upcoming election. I would like to raise a question about how I got entangled with Section 10(n) of the Election Law. They must launch a probe into the case and set up an investigation team. The decision unilaterally made by the Ministry of Home Affairs was unfair for me. As you know, I am an incumbent lawmaker in the Arakan State parliament. The government could take action against me if I had any ties to the Arakan Army. I felt unlawfully bullied, to be denied the right to be elected as a lawmaker.

Q: How long has it been since you communicated with your son?

A: I lost contact with my son since 2014. We don’t have any association with each other financially. I came to know when I received a letter from the commission that my son joined the Arakan Army. Previously, I didn’t know about his fate. This is the reason why I was chosen as a legislator for the Arakan State parliament representing Kyaukphyu constituency. I could have been sued under the election law if I had a connection with my son.

Q: What will you do now?

A: I feel that the decision affects the Arakan National Party, Arakanese people and my voters as well, because I am a CEC [Central Executive Committee] member of the party as well as a lawmaker for the Arakan State legislature. Being a legislator, I am trying my best for the voters in accordance with the election laws and bylaws and the party’s policy. I felt it was unlawfully bullying me that I didn’t have the right to be elected as a lawmaker. I will consult with my party leaders over the cancellation of my nomination.

A: The government has officially announced that it will build a federal, democratic country. In addition, the government has been organising peace talks with the ethnic armed groups. My question is: Will cancellation of a nomination for a lawmaker from the Arakan National Party, representing Arakanese people, help the government move forward in building a genuine, federal democratic nation? Will our goal of ensuring eternal peace, rule of law, self-determination and autonomy materialise? I don’t think so.

I would like to convey my message to my voters to join hands with the Arakan National Party to create federal democracy, self-determination and autonomy in Arakan State.