Vox Pop: ‘Terrorist’ designation of EAOs in the spotlight 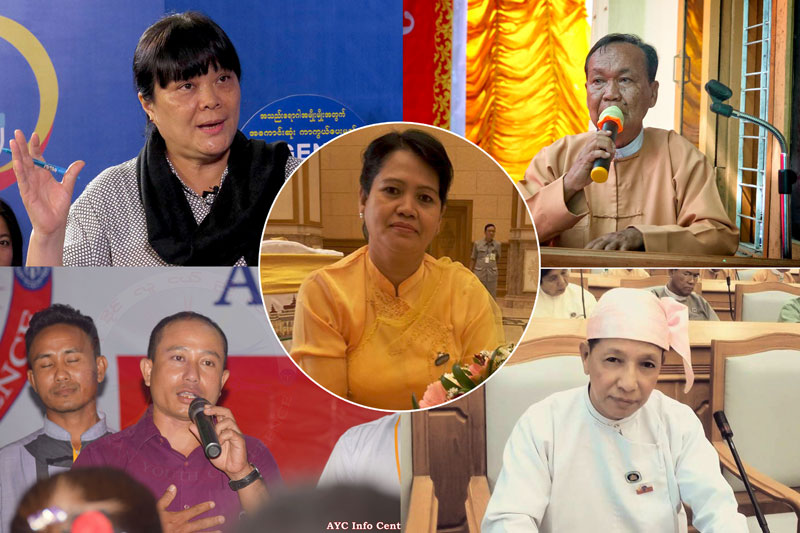 Meanwhile, a committee led by Tatmadaw generals was formed on November 9 to represent the military in talks with ethnic armed organisations, forming a new avenue for negotiations separate from the Nationwide Ceasefire Agreement-based discussions that have been ongoing since that accord was signed in 2015.

With the shifting peace process dynamics and a reconfigured government set to take office next year, DMG’s Aung Htein sought the opinions of a variety of stakeholders to find out whether they thought the government might withdraw its declaration of the Arakan Army as a terrorist group.

“In my view, there will be two aspects. For the first point, based on an optimistic view, it [the Tatmadaw] needs to lead a political process. Especially, this peace process must be led by the Tatmadaw carefully. If it leads the process by showing its important role in the 2008 Constitution and genuine goodwill with respect to the peace process, such a move may move things in a positive direction.

The Tatmadaw is playing a key role in the peace process. So we, NCA [Nationwide Ceasefire Agreement] signatories, are negotiating with the government and the Tatmadaw, but our negotiations with the Tatmadaw are more effective. As such, the role of the Tatmadaw is of greater importance in the participation of NCA non-signatories in the peace process. So, I expect the statement on the formation of the committee will create opportunities for non-signatories to initiate a bilateral agreement process. On the other hand, if ethnic armed organisations don’t grasp the forthcoming opportunities without political points of view, the process of all ways to talk with the Tatmadaw will suspend or backslide in the coming new term of the government. Consequently, the strong contending may cause bad impacts on the peace process.”

“Actually, groups such as the National Reconciliation and Peace Centre (NRPC) have been working for the peace process before the formation of the peace committee of the Tatmadaw. They all have been coordinating in work processes. The committee separately formed by the Tatmadaw is intended to hold talks if necessary. If so, they have to show their work procedures exactly.

On the one hand, the Three Brotherhood Alliance issued its statement as usual. If their work procedures are sped up, it will be best. Everybody knows the peace trend of Arakan State. As the peace process in Arakan State is concerned with that of the whole nation, if they hold talks with positive attitudes, we should welcome it. If they do nominal moves to try to gain political profit, we should do nothing. If they try to hold actual talks with genuine benevolence, it will be best.

In doing so, the Arakan Army should be rescinded as a terrorist group. That is why we cautiously welcome this statement. The statement is a good prospect. But we are still unclear about how realistic this [statement] will be.

So far, the Tatmadaw and the AA have not met face to face. We say that we are on the path to peace only after both sides can start bilateral talks. The fact that there are military operations on the ground by both the Tatmadaw and the Arakan Army means the road to peace is not shining. The Tatmadaw has even looted government-supplied rice for IDPs from the Tin Nyo IDP camp. The government does not even provide regular rice to the IDP camps, and the Tatmadaw confiscates as much as it wants, and travel by employees from international organisations is restricted.

The IDPs may encounter many problems concerning their food in the near future. In this situation, we should refrain from showing any desire for peace, any interest in the international community or playing political games. I would like to comment that the people, especially the IDPs, will be in even worse trouble.

This is a common issue for both sides and it cannot be resolved by one side alone. The Tatmadaw declared a unilateral ceasefire, but to no avail. In addition, the three northern groups have also declared a ceasefire, but that announcement has not been very effective. So both sides must really adhere to the principle.

Terrorist groups need to abide by the rules if they do not want to be classified as a terrorist organisation. The Arakan Army shouldn’t arrest NLD lawmakers or offer prisoner swaps. If the ethnic armed groups show great magnanimity with respect to the peace process, I think all issues will be resolved in a convenient manner.

We have to think positively. We should go in the right direction although it is considered a terrorist organisation. A declaration of a ceasefire is not enough and the implementation of the ceasefire is very important. All people, especially the Arakanese people, want genuine peace very much.

To have peace, we need to have courage and dignity at the negotiating table. We need to talk to each other about what we need to do and what we can do. We can say that just declaring a ceasefire is not enough. I think peace can only be achieved if the real situation on the ground is discussed at the negotiation table.