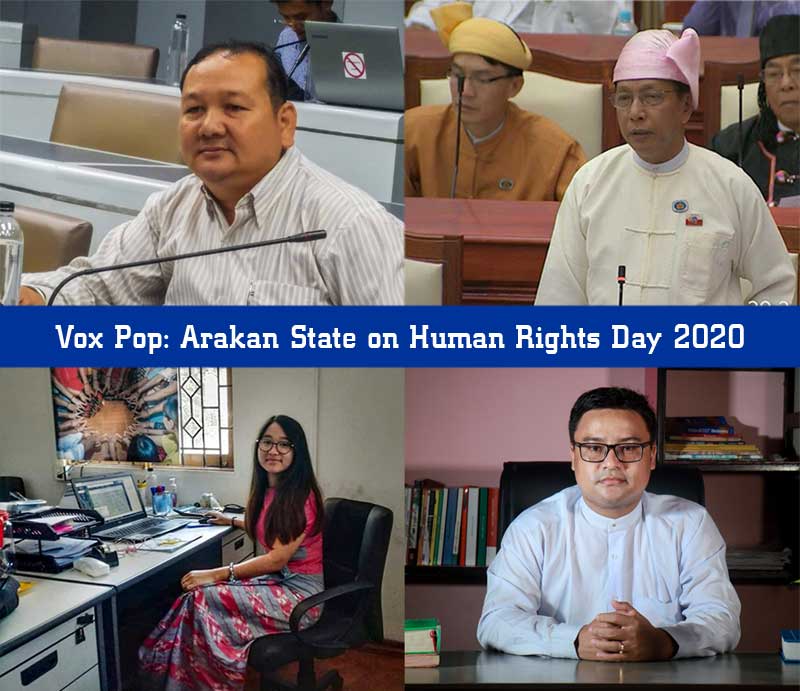 Amid a two-year war that has resulted in hundreds of civilian casualties and hundreds more arrested unjustly on suspicion of illegal involvement in the conflict, International Human Rights Day on December 10 carried particular resonance in Arakan State this year. This year, at the end of which some townships in Arakan State will have endured almost 18 months with severely throttled internet access, or none at all.

Even the day itself was marred by controversy as authorities responded to a demonstration in Sittwe marking the occasion by arresting three youths, who were released on bail later that day but expect to face charges. Still, Thursday was not commemorated without some measure of hope this year as recent weeks have seen an apparent détente between the Tatmadaw and the Arakan Army.

All of this is to note that the state of affairs in Arakan State has felt like a decidedly mixed bag in the wake of Human Rights Day 2020, when DMG asked a handful of human rights activists, youths and an MP to share their thoughts on the issue at hand.

Violations of human rights are mainly due to war. If a political matter couldn’t be settled, wars broke out. It leads to bad consequences such as the internet blackout, unlawful arrests and killing and sending people to prison without having evidence to prove they are involved with a terrorist group. All authorities are humans. So, they need to stop their activities once they notice that their activities amount to persecuting civilians. I’d like to urge them to avoid such activities.

What I want to suggest to the government is to revoke the declaration of the AA as a terrorist organisation as a move to make peace with the AA. And, I would like to urge the government to lift the internet ban that was imposed in some Arakan State townships for nearly two years, to ensure human rights for the people. The Tatmadaw and AA have now started peace talks. I think human rights violations will decrease gradually when hostilities end in the state, when the government puts in more effort to ensure the peace process is successful by negotiating with the AA. That’s why I’d like to ask the government, the Tatmadaw and the AA to conduct a tripartite discussion to end war in Arakan State.

The government lifted the internet ban, but it prevaricates by providing a 2G network. So, our young people from Mrauk-U and Kyauktaw cannot join online classes provided by our office. Having internet access is as essential as human rights. Thus, I’d like to ask the government to provide a 4G network or a mobile phone service that ensures people can talk on the phone better.

I wish the victims of unlawful arrest would be released immediately. I think the relevant ministries and governments should seek to free them, showing they respect human rights. They should seek justice for family members of victims of unlawful arrest. The third point is regarding the internet shutdown. People generally think it is ‘just’ an internet shutdown and that it does not matter if there is no internet access. But in fact, only affected people can know the impact of the internet shutdown. They lag behind in all affairs such as social, economic, educational and healthcare. And, human rights breaches can be worse in the affected areas.

The government should not have arrested three youths who talked about human rights at the beach. They peacefully did the campaign this morning [on December 10]. It is an oppression on those who expressed their voices, and it is an act of allowing terrible violations of human rights. Some people dare not express their voices because of such a situation. If such kinds of arrests remain in the state, the situation will be worse. I think the government should prevent it by avoiding such arrests.

Not only members of armed groups, but also the government’s departmental officials are breaching human rights. But they do not know whether they are violating human rights. For example, people in Arakan State cannot express their voices. Today [December 10] is International Human Rights Day. Some Arakanese youths celebrated the event by riding motorbikes at Sittwe Beach and flying the Peace flag. It is just a campaign for peace, not a protest. They took photos at the beach. But the police arrested them. It is a breach of human rights. Freedom of expression is stated in Article 19 of the Universal Declaration of Human Rights.