China-backed Kyaukphyu SEZ in the spotlight 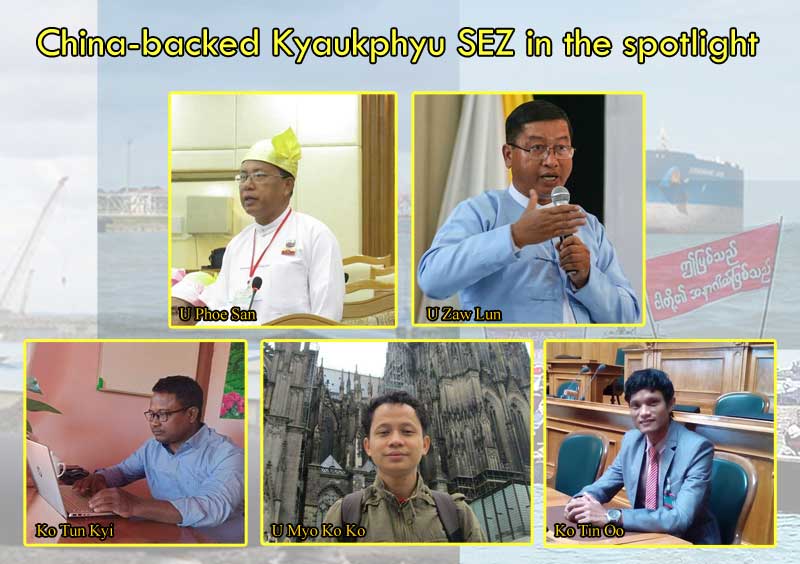 Since it was first announced in 2013, the Kyaukphyu special economic zone (SEZ) has been a frequent topic of conversation in Arakan State and beyond; the project’s potential, its problems, and the many people it will affect — for better and for worse.

During Chinese President Xi Jinping’s visit to Myanmar about a year ago, the two governments signed concession and shareholders’ agreements for the Kyaukphyu SEZ, which is sited along the Arakan State coast and is backed by Beijing. The project is to include a deep-sea port, industrial zone and housing estate, and will use more than 4,200 acres of land.

DMG’s senior reporter Thiha recently reached out to civil society organisations and a lawmaker representing Kyaukphyu to glean their views on the SEZ.

The Kyaukphyu SEZ is a vast economic zone. While the Shwe gas pipeline is being implemented in Arakan State, no profit from the pipeline is shared with the state. When it comes to resources in ethnic minority-majority states, the central government makes all the decisions and does not share profits with ethnic states. Ethnic states are not happy with that, and this is one of the contributing factors to armed conflicts. The government should therefore work toward establishing a federal union based on equality.

Meanwhile, the government should share a certain percentage of profits from projects with local residents. In most of the projects, local residents have had their farmland confiscated or damaged. The projects left serious damage to the environment. In Arakan State, coral reefs were destroyed by projects, which led to depletion of marine resources. This has only thrown local fishermen and smallholding farmers into poverty. So, companies should also compensate local residents depending on their profits.

The government has not publicly clarified how it is conducting the EIA and SIA for the Kyaukphyu SEZ. Though there are EIA procedures in place in the country, local residents and civil society organisations are in fact restricted from participating in the process. As only companies and the government conduct the EIA, it can’t be called a proper EIA. There is a need to establish a more transparent system.

Special economic zones are being set up around the world for regional development. Depending on the location of the SEZs, locals must have been informed before the implementation of the project. Environmental impact assessment and social impact assessment (EIA/SIA) management plans need to include all of these long-term implementation plans. We need to inform the local people about the project, and if we can’t, it will not be fair.

Local needs also need to be considered when making local development. When planning a project, it is important to consider the long-term interests of the local people and to work systematically to improve the quality of life of the local people. The project will be transparent only if we live hand in hand with the locals.

If the project is successful, the region will gradually improve. This is because of the need for a special economic zone in the region, but the procedures are wrong. Contracts have been signed in the past, but it is clear that there has been no transparency. They need to be transparent in order to be successful in the long run. So if things can’t get done right now due to COVID-19, this is a good opportunity. Once the coronavirus is over, you need to work closely with the locals.

According to Article 251 of the Constitution, if a project is to be carried out, it must be submitted to the state parliament. If you want to make a big project, whether it is foreign investment or domestic investment in the state, you have to come to the state legislature first and present it. During my parliamentary term, only one Chinese company, called V Power, explained that it would build a 150-megawatt power plant in Kyaukphyu for production and sale to the government. No other Chinese company has come forward to explain the project to the Arakan State legislature. These are the responsibilities of the union government, and the union government must present such projects to the state parliament.

At present, there is no explanation about the project, and only a letter has been sent to the administration to draw up a plan for the port and how much land will be confiscated. The MPs were not informed about the project. Although parliamentarians are accountable to the people, I feel that this ignorance is tantamount to not informing the people. Therefore, I would like to request that local lawmakers be informed if any future projects in Arakan State are going to be implemented.

Another is to inform the local people in the project area widely. This is very important, because when the Shwe gas project was implemented, local lands were confiscated without [affected people] being informed in advance. The people only got to know when the letters came out stating that no one would be allowed to travel from one place to another. All the locals have to be summoned and explained to, but as far as we know, they took some locals close to them and paid a small amount of money when the Shwe gas project was developed. To prevent this from happening again, we need to bring in all the locals and openly disclose the details of the project and the environmental and social impacts of the project.

I think this project will be successful only if it clearly shows what kind of factories will be built and how many job opportunities there will be and what benefits will be available to the state.

The president himself issued a directive to make resource extraction projects transparent in January 2020. But so far nothing has been said about the Kyaukphyu SEZ. The first phase of the Kyaukphyu SEZ is to build a deep-sea port, but no action has been taken on how to prepare for the damage.

We welcome the president’s statement, but I do not think it is enough. If it is going to be a federal state, the government will have to figure out how to share the profits from the big projects. What we the Arakanese people want is to know how much of the project profits will be used for Arakan State and how the people in the project area will benefit from the project.

Many of the companies currently operating, especially Chinese companies, in Myanmar have recently changed since under junta rule, and they do not seem to care as much about the status of township and district-level officials. A government-signed project is a form of blaming the government for taking responsibility.

Therefore, the government should take into account the interests of its people rather than investing in GDP growth. According to the United Nations Guiding Principles on Business and Human Rights, governments must protect their citizens. It requires the government to respect all ethnic groups and local people, and to provide adequate compensation for any damage caused by the project. But businesspeople often pretend they do not know it.

When our government implements a project when the laws are not strong, the locals often suffer. Therefore, it is necessary to have systems in place to monitor projects. The government needs to involve indigenous peoples, local representatives and CSOs in the ongoing SEZ project, regardless of what the company is doing. The government has a responsibility to ensure that it is comfortable with its neighbours and that its people are not harmed.Finally, the government should change the constitutional notion that land, water, and surface resources belong to the government. If we work in accordance with international standards, we should look at how we are doing things to ensure that indigenous peoples are not harmed by international projects.