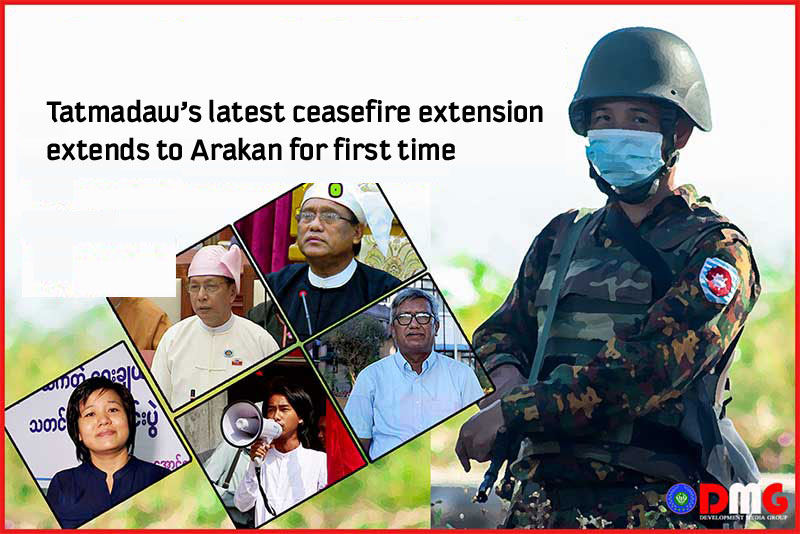 After some two years of fighting in Arakan State, Myanmar’s military (Tatmadaw) and the Arakan Army (AA) have been observing an unofficial ceasefire since early November.

Meanwhile, since the Tatmadaw first announced a four-month ceasefire across much of the country in December 2018, it has extended the unilateral declaration several times, but each time the extension excluded conflict-torn Arakan State. However, when it announced another extension on January 28, through the end of February, the Tatmadaw included Arakan State for the first time.

Given the latest developments, DMG reporters Hnin Nwe and Nyan Hein talked to politicians, civil society leaders and other stakeholders about prospects for peace in Arakan State, including whether and when the state’s people displaced by conflict might return home.

A proposal was also submitted to the state parliament for the return of internally displaced people (IDPs). The proposal urged the government to ensure the safe return of IDPs to their homes, clear unexploded explosives, and help rehabilitate their livelihoods. The proposal was passed without anyone objecting to it. However, there can be certain difficulties in implementing that proposal. Though the Tatmadaw and the AA have ceased fighting, the two sides remain close in some areas, and there is no security to go to those places. The government must work to ensure troops deployed near villages withdraw step by step over time. Civil society organisations and other responsible agencies should also join hands with the government.

We should take time and make preparations to facilitate their return. The government must provide assistance. Again, I would like to say I am delighted that a ceasefire has been announced across the country, including in Arakan State, and I hope there will be a more concrete truce.

In light of this [inclusion of Arakan State in the latest ceasefire], deconfliction talks between the Tatmadaw and Arakan Army are promising. I think this is a positive ray of hope.

The camps for internally displaced people (IDPs) vary from place to place. The IDPs are concerned about the lack of demining in some areas. In some places, fighting could resume as the troops are closely stationed. In some places, the IDPs have difficulty finding food and shelter. For a variety of reasons, IDPs are taking refuge at IDP camps. Some IDPs have ventured out and returned home. The government needs to step in to clear landmines so that IDPs can return soon, before the rainy season. The Tatmadaw and the AA need to work together to clear landmines and to ensure peace in Arakan State.

Second, I would like to talk about the return of IDPs along with the ceasefire. Many villages have been burnt down. It is feared that IDPs will be forced to return because there is no war. If the IDPs are forced to return home, they may find it difficult to make ends meet when they return.

Much depends on whether there are resettlement plans. Another issue is that even if there is no more fighting, landmines can be encountered when people go out to search for food, even during a ceasefire. Demining needs to be conducted carefully. I think the government needs to take action not only to deal with resettlement, but also to clear landmines as soon as possible.

The de facto ceasefire in Arakan State was on November 12. Now it is officially recognised by the Tatmadaw. The government is currently negotiating to meet with the four Northern Alliance members. However, due to the current civil-military tensions in Nay Pyi Taw, the peace negotiators will meet with the four Northern Alliance members once these issues are resolved and a new government is formed.

Regarding the signing of a preliminary ceasefire for the return of IDPs, I think we will have to wait for the NCA [Nationwide Ceasefire Agreement]. Only then can the IDPs return home. I don’t think the government can do that at a time of civil-military tensions.

In terms of peace, we cannot talk about Arakan State in general; we need to be involved in peace across the whole country. The Tatmadaw should not have a ceasefire in one state and fight in another. Indeed, for peace on a nationwide scale, armed groups should be called in for talks. There should be no ceasefire with one group and fighting with another group. Now there is an increase in the number of refugees in Kayin State. And the fighting has not stopped in those areas. I think the Tatmadaw needs to fulfill the needs of ethnic people to ensure a genuine peace.