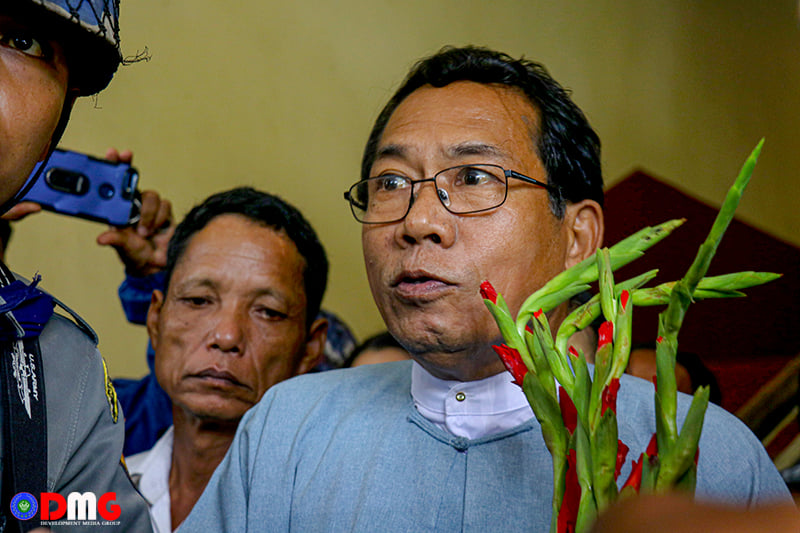 The prominent Arakanese politician Dr. Aye Maung, who in 2019 was sentenced to 20 years in prison for high treason and sedition, was released on February 12 under an amnesty by the junta to mark the 74th anniversary of Union Day.

He was arrested in January 2018 over remarks he’d made earlier that month at an event in Rathedaung Township commemorating the 233rd anniversary of the fall of the Arakan Kingdom to the Burmese in 1785. In March 2019, Dr. Aye Maung was sentenced along with the writer Wai Hun Aung to 20 years in prison for high treason under Article 122 of the Penal Code, and another two years for sedition under Article 505, with the sentences to be served concurrently.

Freed last week, Dr. Aye Maung recently spoke with DMG about his future plans and his views on the state’s and nation’s current political landscape.

Question: What do you want to say about your release?

Answer: I’m glad, and would like to express my gratitude for the release. First, I’d like to express my gratitude to the Arakanese people. They have supported me since before I was imprisoned and during my imprisonment, and they repeatedly called for my release. And the ULA/AA [United League of Arakan/Arakan Army] also called for my release during its talks with the military. So, I’m also grateful to the ULA/AA. I am also grateful to the State Administration Council led by Senior-General Min Aung Hlaing. It was they who set me free.

As you know, I was arrested over a talk on the topic of the fall of the Arakan Kingdom. Those who arrested me and the author [Wai Hun Aung] at the time were irrational to have arrested us over a talk. They failed to notice that the event was allowed for years under the U Thein Sein government. So, those who imprisoned me will not be happy if I say that I thank Senior-General Min Aung Hlaing for releasing me.

The Union-level authorities [of the deposed NLD government] had many opportunities to release us if they’d had the will. When they released [Reuters reporters] Wa Lone and Kyaw Soe Oo, I had already been moved into Yangon’s [Insein] Prison. It appeared that they’d failed to notice me at the time.

Again, there are four or five conditions that constitute ‘high treason,’ such as instigating inside and outside the country to revolt against the sovereignty. We were wrongfully charged for things that we didn’t do at all. We presented our argument to the courts at different levels and the president [at the time, U Win Myint]. But they apparently did not recognise it. So, they let it be; [former President] U Win Myint did not take the opportunity to release us.

Senior-General Ming Aung Hlaing released us on Union Day in consideration of national reconciliation, and frankly speaking, we have to be grateful to him for releasing us understandingly. If the NLD [National League for Democracy] forces are to criticise us for that, they should reconsider. Was the charge against me appropriate?

If [NLD supporters] refuse to consider [that I was wrongfully charged] and instead sling mud at us for being released, I would say they fail to realise that thinking for the long term is important in politics. So, to summarise, I am grateful to the ULA/AA and the Arakanese people, who have repeatedly demanded my release for years, and to Senior-General Min Aung Hlaing, who released me.

Q: How will you continue to be involved in politics?

A: There are many limitations to Section 122 [the Penal Code’s ‘high treason’ provision] to answer that question. According to the 2008 Constitution, those charged under these sections cannot be included in parliamentary politics or in the cabinets. As a person who has been imprisoned on charges of sedition, the party politics I will continue to pursue is likely to be broad. For me, participation in parliamentary politics and as head of government is currently a major obstacle under this article. On behalf of the Arakan Front Party (AFP) I formed, I will travel to all parts of the state within a few days of my return to Arakan State. I aim to be a party that can lead the whole of Arakan State for a period of time.

Q: What do you have to say about the armed conflicts and the large number of internally displaced people (IDPs) in Arakan State during the time of your imprisonment?

A: What we really want is for Senior-General Min Aung Hlaing to grant the full autonomy that the ethnic nationalities have been wanting for 70 years; in other words, a genuine federal union. If the Tatmadaw can build a federal democratic union toward that end, it will be able to achieve the goals of all ethnic groups. I want the Tatmadaw to do their best to end the prolonged civil war.

In Arakan State, we want a preliminary ceasefire agreement to be signed with a military delegation led by Lt-Gen Yar Pyae after negotiating with the ULA/AA as much as possible. And I want the government to understand the current situation of the ULA/AA, which has been declared a terrorist organisation. In that case, it would not be appropriate to imprison young people from Singapore, such as Ko Aung Mrat Kyaw, who lived with us in prison, on terrorism charges. We want such a person to be released as soon as possible. We want to release the Arakanese people who have been arrested in some areas under the Counter-Terrorism Law. I want a peaceful solution.

We also want the Tatmadaw to clear all landmines and resettle all displaced people as soon as possible. In that case, we would like to send a message in advance that we will gladly welcome the work of the current government after we were released from prison and that our people will accept it.

Q: What are your thoughts on the recent military coup?

For one thing, unlike those who seized power in the past, the senior-general did not repeal the Constitution; he acted in accordance with the Constitution. I think that he is taking over power with the promise of holding free and fair elections. When the president is prosecuted under any law, the president is no longer legally responsible. At that time, Vice President-1 U Myint Swe took over as interim president.

In this sense, the National Defense and Security Council (NDSC) meeting was convened and six out of 11 members attended the meeting. According to the National Defence and Security Council, when the interim President U Myint Swe took over state power, he acted in accordance with the Constitution. The current situation is not the same as when U Ne Win took power via the Revolutionary Council, or when General Saw Maung came to power in the 1988 uprising.

According to the 2008 Constitution, power is transferred only after a state of emergency. After that, there is a promise to hold elections. It remains to be seen whether the council will be made up of civilians. It is not a coup d’état. We understand it as a transfer of power. As a result, the ethnic nationalities understand that it is a situation where both ears are open.

A: I want to express many thanks to the Arakanese people. I would like to thank all the Arakanese people and their families for supporting me while I was in prison and in court. In any case, I pray for the stability of our Union and for those in power to negotiate peacefully.