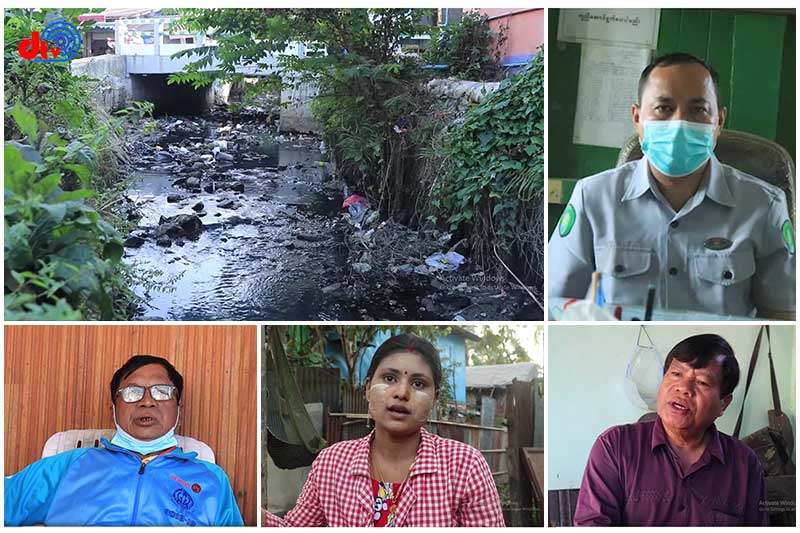 Known as Kalar Chaung or Myolel Creek, a small stream contaminated by bitumen and plagued by silting passes through several downtown Sittwe wards, causing headaches for residents of the Arakan State capital.

The creek used to be 15 feet wide and over 10 feet deep, but now it is just a ditch full of rubbish. When we were young, we could swim in the creek and go fishing. The water was clear and clean. Many boats carrying fruit from the Lay Myo Creek and other areas docked at the same creek. That is why it is one of the most important creeks in Sittwe.

Currently, the creek [water] is being replaced by bitumen sewage due to debris and silt. As the creek thickened, neighbourhoods in Sittwe were flooded during the rainy season.

We have experienced this since we were young. Due to the garbage and dirt, the house is flooded with dirt and we have to stay out of the house. Sometimes it takes four or five days; sometimes it rains for 10 or 15 days a month.

In addition to the debris, [the deterioration of] the creek is also said to be due to the paving of the creek at the mouth of the creek during the Sittwe creek project and the coastal land reclamation project of BXT Company in Mizan Ward.

The creek’s water flow was good in the past, but now it is not. The creek is not even 5 or 6 feet deep, and the creek bed is paved with rocks. If BXT digs deep inside the creek, it will have to go back to the creek. The project, which was agreed upon by BXT and the state government, seeks to turn the mouth of the downtown canal into a water outlet, but was opposed by locals and lawmakers.

The flooding problem is being felt by all the townspeople along the creek, and all locals want to improve the flow of the creek.

If the creek was to become murkier, Sittwe’s Kathe and Dhanyawadi quarters would be submerged. Even Mangyin Myaing and Kone Tan quarters are likely to be flooded. In the past, Byauk Thee Su Ward was quite high. Now the area adjacent to Ywagyi Road and Myo Thu Gyi Road is flooded during the rainy season. If left unmanaged, they can be left astray and lose the right path.

The creek is located in the center of Sittwe, the capital of Arakan State, and should be maintained by the State Administration Council. The Sittwe City Development Committee is dredging silt in the creek before the annual rainy season, and is working to do more.

As you know, dredging streams has to be done with special funds. We also need technology. There is also a need for financial resources to dig the creek. Depending on our financial situation, the excavation will be reported to the authorities later.