‘Everything is a mess’: Residents describe deserted Tinma village as overgrown, burnt out 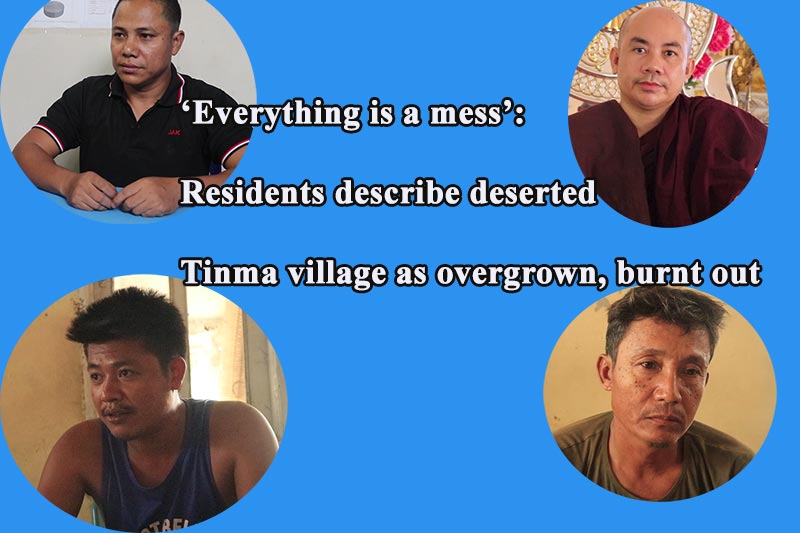 Residents of Tinma village in Kyauktaw Township, Arakan State, were displaced by fighting between the Tatmadaw and Arakan Army in March of last year. Hundreds of houses in the village were burnt to the ground after the villagers fled the hostilities. For more than a year, the village sat deserted.

But on March 23, 2021, some villagers and former MPs visited Tinma to assess the situation on the ground, doing so with the approval of the Arakan State Administration Council. DMG recently interviewed some of those who were part of the visiting contingent about what they saw and more.

Five villagers and I visited the village on March 23. An official of the Arakan State Administration Council contacted me on March 22 because villagers had submitted a letter to the council asking to allow them to take the paddy that was left at the village.

We compiled a list of destroyed houses. The list is made up of two categories: destroyed by fire and destroyed by natural disaster or people.

We are farmers so we have farm trucks, locally called htawlargyi. I cultivate potatoes and chilis as well. We left a big basket of paddy, motorbikes, a tractor and water pump when we fled home. If I total up the loss of my property, it is about K18 million [$11,500]. Our main intention is to take the paddy that we left in the village. We found that the paddy we’d kept systematically in the barn was not good because the roofs were open and the paddy was destroyed by rainwater. About 10 houses received their paddy in good condition.

There are many things to be done to return home. For resettlement, homes are the most important item. For me, my house was destroyed by fire.The second important item is agricultural facilities and cattle, because we are farmers. We have to check what has happened to our farmland and cattle, as well as tractor and paddy seeds to resume cultivation. And authorities need to clear landmines. We need a hospital or clinic for our health. Also, we need education access for our children, who are losing out on their future. After we get back all those requirements, we can return home.

Villagers want landmines cleared from the nearby forest, which they depend on for their livelihoods. The villagers whose houses were destroyed want the government to rebuild their homes.

Because they are farmers, they want tractors and paddy seeds to resume paddy cultivation. And they demand justice for the 18 Tinma villagers.

Another demand is that they do not want military deployments near their village because they are worried that the soldiers will harm or disturb them. The villagers want to live in their village peacefully. I hope the SAC [State Administration Council] will fulfill the demands of the villagers.