Vox Pop: Is a nighttime curfew in Arakan State necessary? 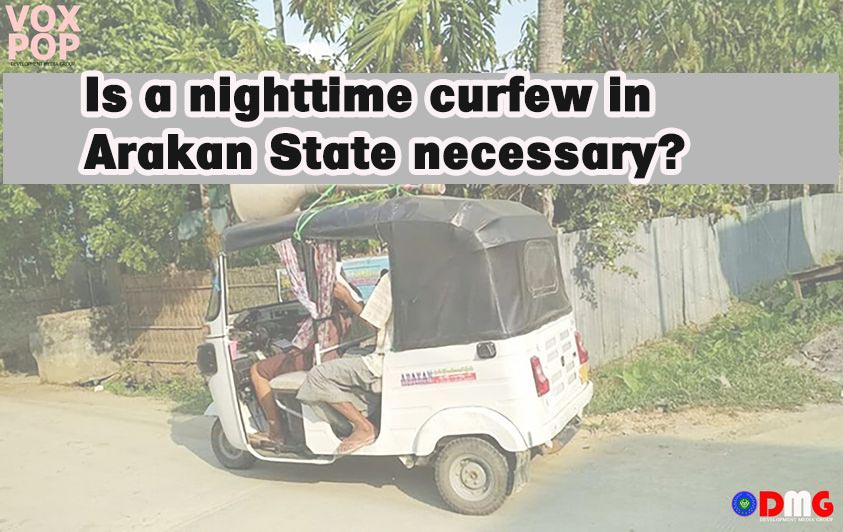 The imposition of a nighttime curfew over recent days in some Arakan State townships has prompted questioning among locals, coming at a time when an informal ceasefire between the Myanmar military and the Arakan Army has brought a peace to the region not seen in more than two years. DMG interviewed residents, civil society organisations and the Arakan State military council to glean their thoughts on the curfew orders, which have been applied selectively across Arakan State’s 17 townships.

U Kyaw Min Khaing || Local in Rathedaung town, where a nighttime curfew has been imposed

The nighttime curfew, which takes effect from 9 p.m. to 5 a.m., was announced in our town yesterday [June 3]. Realistically, a nighttime curfew is no longer needed as there is no fighting now. Continued enforcement of the curfew means imposing restrictions on locals. It can be said that the current crisis happening in Myanmar is not concerned with Arakan State. There is a small chance that more fighting occurs in Arakan State in the future, from our perspective. Imposing a nighttime curfew causes difficulties for locals who are earning their livelihoods in the region. And, because there are many IDPs in our state, they have to go out to IDP camps and work to make ends meet as daily wage earners. The weather is very hot now, and so they [prefer to] go out in the evening to work. Imposing a curfew will cause difficulties for them. Therefore, we want the nighttime curfew to be lifted in Rathedaung, as it does not need to be imposed.

U Ann Thar Gyi || Local in Minbya, where nighttime curfew has been imposed

An overnight curfew was imposed in Minbya yesterday [June 3]. In my opinion, I think this is not concerned with our region, and although the curfew starts running from 9 p.m., some streets in front of the police station in Minbya town have been closed since 6 p.m. And, farmers will have to do farming tasks as the monsoon season has arrived. Businesspeople have to do their work too. So, imposing a nighttime curfew can cause difficulties for businesspeople and farmers. Since there is no fighting now, as a local from Minbya, I want this order to be lifted.

The current situation of Arakan State is stable. So, I assume that this order should be lifted. The nighttime curfew has restricted the lives of residents in Arakan State. As monsoon season has arrived, daily wage earners have to go to the market early to sell their goods, and businesspeople as well. Moreover, imposing a nighttime curfew during a period of unstable goods prices makes people experience more hardship.

Ko Aung Khaing || Local from Pauktaw town, where nighttime curfew has been lifted

Residents from the areas where a nighttime curfew has been imposed are facing difficulties. There are businesspeople and daily wage earners in these regions. They can face many difficulties. And, people who sell vegetables can face difficulties as they have to go out early. As the curfew order has been lifted in our region, it is good for locals and the region’s economy. Moreover, it is good for those who suffer sudden illness at night, as they can go to the clinic freely. Imposing a nighttime curfew restricts our freedom.

This order is imposed as we have to consider the opinion of organisations that serve in terms of security. Nighttime curfew orders are a township-level issue. State-level authorities have to compile the opinions of military and police security forces. State-level authorities have to collect their opinions, and announce their opinions; whether they agree or not on lifting the curfew. We issue orders only when they are in agreement. If people want this order to be lifted because their region is stable, they can submit [their opinions] to the state-level via the respective organisations as well as submit their opinions to the respective township administrative team.