Lekka villager: ‘They will suffer just as we were tortured. The debt is repayable. I will never forget.’ 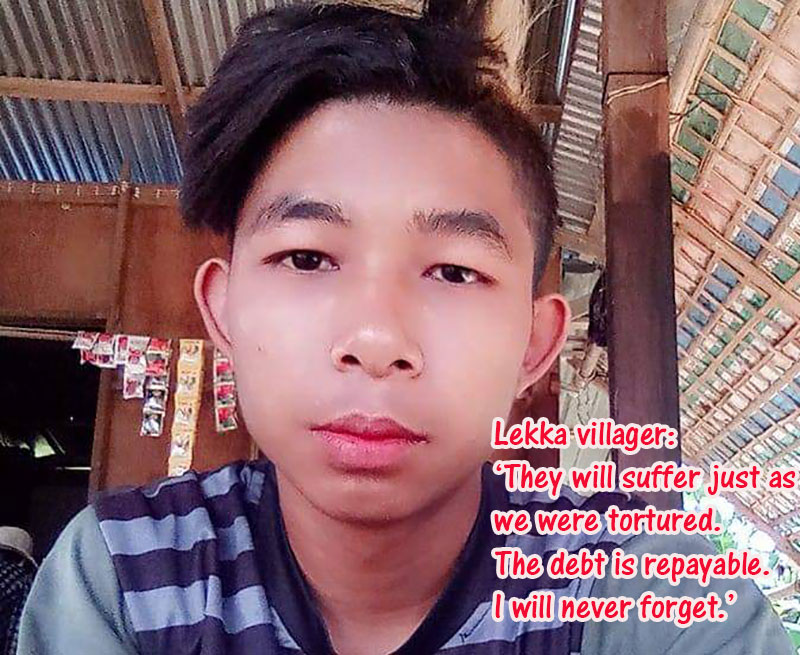 Twenty-seven residents of Lekka village in Arakan State’s Mrauk-U Township were arrested by Myanmar military personnel on April 10, 2019. Among the arrestees, Ko Zaw Myo Tun, 25, U Thein Tun Sein, 35, and U Maung Than Nu, 41, were reportedly tortured to death during subsequent interrogations in military custody.

DMG spoke to Ko Soe Min Oo by telephone about what happened in the village on the day of the Lekka villagers’ arrest, and discussed the events that unfolded thereafter.

DMG: First of all, please tell me about the situation on the day you were arrested by the Myanmar military.

SMO: A clash broke out between the Myanmar military and Arakan Army (AA) near the village on April 10, 2019. The fighting took place at around 7 a.m. and lasted for about 30 minutes. When the fighting ended, the Burmese soldiers entered the village at around 10 a.m. while the villagers were doing their normal work.

DMG: How did the Burmese soldiers enter Lekka village and what happened in the village?

DMG: Why were the villagers of Lekka arrested?

DMG: Where did the military arrest the villagers and take them away to?

KSMO: The Myanmar military arrested all 27 villagers, tied them with ropes and took them to the motor road. The Burmese soldiers then loaded the 27 detainees onto a truck and took them to Mrauk-U’s LIB [Light Infantry Battalion] 540. When we arrived at the battalion in Mrauk-U, we were told to get out of the truck and were placed in a field. As soon as the detainees got out of the vehicle, they were kicked by Burmese soldiers. The Burmese soldiers covered the detainees’ faces with clothes. The soldiers asked for each detainee’s age, name and parents’ names, and boarded the plane.

DMG: What did you think would happen in that situation?

KSMO: We had never experienced such a situation. I think this is probably the first time in Arakan State that 27 Lekka villagers have been arrested. We were concerned for our safety because we had never heard of such an arrest. We were worried we would be killed. We were so scared because we did not know where we were being taken. And we were worried that our parents would be affected by this arrest.

DMG: Where were the villagers of Lekka taken after Mrauk-U’s LIB No. 540?

KSMO: The soldiers tied our hands with cable ties, tied our back legs and loaded us on the plane. I didn’t know where we were being taken from Mrauk-U’s LIB 540. We were piled on top of each other on the plane. The ropes were so tight that the blood stopped flowing. When we were in so much pain, the soldiers beat us. Soldiers beat our heads with their helmets. After a while, we were dropped off from the plane, loaded into a car, and taken to an unknown location. We were held in separate locations there. It was early in the morning when we learned that we were in Sittwe. We had been sent from Lekka village to Sittwe overnight.

KSMO: I was hungry because I had not been fed for three days. On the fourth day of interrogation, I was fed rice without curry. They asked me, ‘Are you from the Arakan Army? What do you do for the Arakan Army? What is your role in the Arakan Army?’ I denied their accusations, saying ‘No’ in reply. The soldiers punched me in the face and beat me on the legs with a small stick. If I cried because I was in so much pain, they would stop beating me. The Myanmar military filed a case against me on suspicion of having links with the Arakan Army.

DMG: Three out of 27 detained Lakka villagers were tortured to death in military custody. What do you know about their deaths?

DMG: What do you have to say about being arrested and prosecuted by the military?

KSMO: They will suffer just as we were tortured. The debt is repayable. I will never forget that. We want those who wrongfully arrested and prosecuted us to be punished, whether by law or not.

DMG: Twenty-two of the Lekka villagers have been facing trial for almost three years. What do you want to say about them not yet being free?

KSMO: I want them released as soon as possible. The detainees are the heads of their families. Because of their detention, family members are facing many difficulties. I also grieve for the families of the detainees.