Vox Pop: ‘The new broadcast law amendments are about controlling the media industry’ 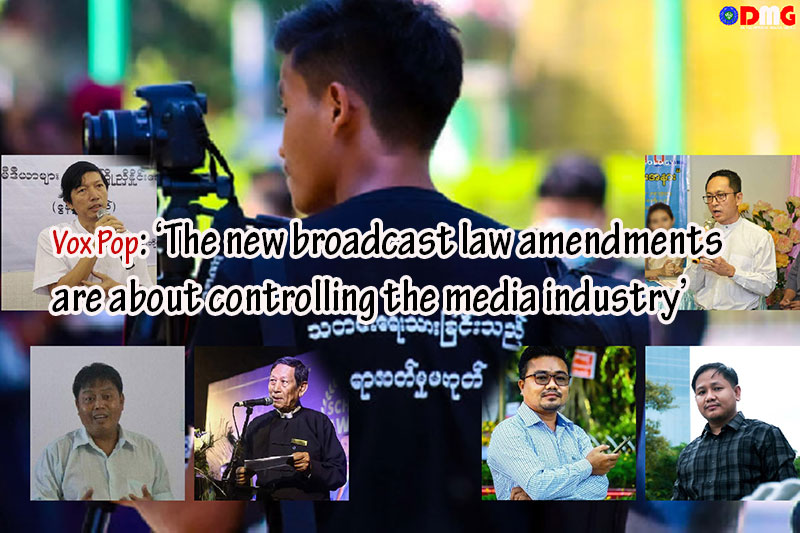 The junta’s State Administration Council (SAC) on November 1 promulgated the Second Amendment Law to the Television and Radio Broadcasting Law. For a variety of offences, the amended law stipulates harsher penalties, including prison sentences that did not exist under the previous iteration of the legislation. It also broadens the scope of the law’s remit so that its provisions can be applied to media made available via the internet or “any other technology”. DMG interviewed six media professionals about the recently amended law.

There are three points that we need to think about regarding the Second Amendment Law to the Television and Radio Broadcasting Law. The first one is for online media and traditional media: We have to consider whether the new amendments could cause a challenge, or a barrier, or a threat to such media.

It is not an official law because it does not have the signature of the president. And, a TV and radio broadcasting media council [is to be created under the original law], but there is no by-law and the council has not been established.

Previously, the law provided fines for offences. But the new law amended the fines. And it has added three to five years’ imprisonment. It means all online media can have action taken against them at any time. It amounts to threatening online media.

We must conclude that the regime council can sentence imprisonment to those they suspect or have already listed to arrest by charging under the amended law. They arrest the people who are against the coup. So, we can assume that they will charge the detained people under the new amendments. They can take action any time against people from the media industry who are staying in Myanmar. So, it is dangerous for them if they are in Myanmar. For those who are outside Myanmar, it is not risky.

The original broadcast law was never exercised. Now, taking action according to the law has begun. In fact, a TV and radio broadcast council is required to be formed if the law is to be implemented, to take action [against violators]. And, people should have a right to apply for a broadcast licence. But the regime council skipped these steps and amended the law online. The law is being misused.

It is an attempt to control the media industry; practically speaking, it is a threat. It aims at online broadcasting. It says to nationalise the properties of unlicensed media. It is concerning for the media industry in Myanmar. Currently, people can access information online. So, the people’s rights to access information will be curtailed. It will be controlled. And, there might be some examples of taking actions under the law.

I think the second amendment was enacted because they do not want to have the fourth pillar. As the existing law was not enough to destroy the media, he [coup leader Senior General Min Aung Hlaing] firstly banned some media outlets. Now, he is trying to close all loopholes. When there is no media and no loopholes for media broadcasting, they can keep maintaining power by holding elections after adopting a PR voting system.

The new amendments they enacted are about controlling the media industry. I think it is a law that should not exist. It is a dangerous law for the media industry. As the new amendments are enacted while the media throughout Myanmar are covering news online at the moment, it is an attempt to black out information. We have to open a VPN [virtual private network] to use Facebook and other websites. In Arakan State, an internet cutoff was lifted recently. Now, the second amendment law is enacted. So, I think it is attempting to black out information by different means.

The current situation is under the military administration. Its policy is to control everything and they will do what they want to do. It is difficult to say whether it is right or wrong on the second amendment. If we say the new law is not fair, we might be assassinated. The amendments are limiting the chances for people to [report and consume news] online. News outlets that have revoked licences will face difficulty presenting the news.