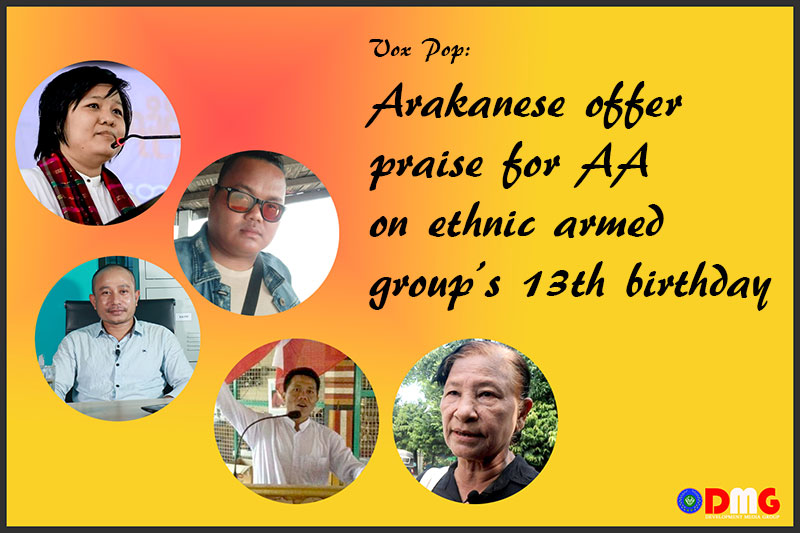 Sunday marked the 13th anniversary of the founding of the Arakan Army (AA), which was established by 26 young people on April 10, 2009, in Kachin State’s Laiza, the headquarters of the Kachin Independence Army (KIA). The Arakan Army now counts thousands of soldiers among its ranks, and has established a strong presence in Arakan State, both militarily and administratively.

It has been more than one year since the Myanmar military and Arakan Army reached an unofficial ceasefire agreement, putting a stop to some two years of war in Arakan State. The AA has used the peacetime to build out a parallel administration in Arakan State, including a separate judiciary, revenue department, public security offices and other governing institutions.

On the ethnic armed group’s 13th birthday, DMG asked Arakanese people to share the thoughts and hopes for the Arakan Army.

It is 13 years now since the AA embarked on its journey. We do appreciate what our forefathers did [for the interests of Arakan State]. However, what the AA has done under its current leadership is remarkable and we are only too glad to see it.

The AA is outstanding in military, political and diplomatic affairs. Its leaders are quite visionary. Some people may not like it, but it is undeniable that Arakan State now has an Arakanese government. We have to make collaborative efforts to make sure it is a good government, and focuses on the interests of Arakanese people. The AA was formed to serve the interests of Arakanese people, and I do believe those serving in the AA will consistently serve that purpose.

As an Arakanese, I am very proud to see that AA has been able to do amazing things in such a short period of time. However, the Arakan Army will continue to struggle to reach its destination. The Arakan Army is considered by all Arakanese people to be the single most reliable and dependable force in Arakan State. At the moment, we are on the path to revolution and we have great respect for the Arakan Army as a government trying to meet the needs of the Arakanese people.