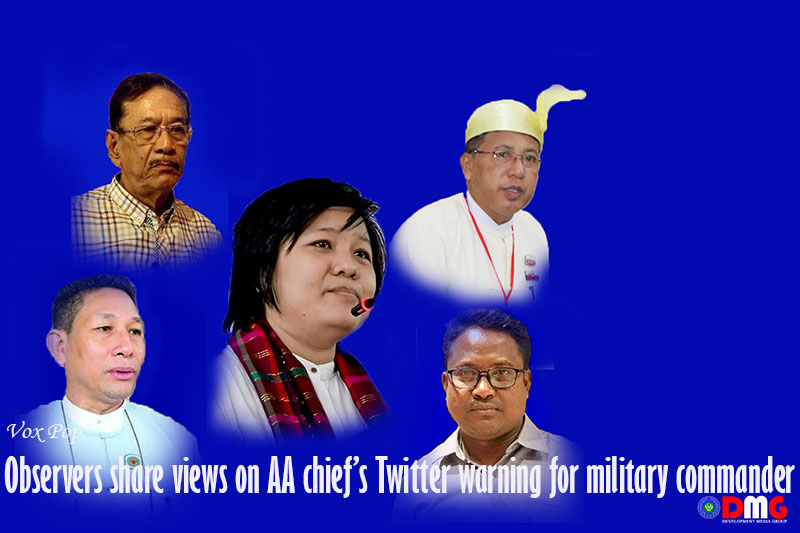 “Ko Htin Latt Oo, don’t go too far. You have been irritating. I won’t give a shit about peace [if you carry on]. I will come to your place and crush it,” Arakan Army (AA) chief Major-General Twan Mrat Naing warned on Twitter on Friday, addressing the commander of the Myanmar military’s Western Command.

The decidedly hostile remarks come as Myanmar’s military has been increasing its presence across Arakan State. There have been multiple arrests of both Arakanese Buddhists and Muslims on suspicion of having ties to the Arakan Army in recent weeks, despite the ethnic armed group having reached an informal ceasefire with Myanmar’s military toward the end of 2020.

The social media warning played out against the backdrop of junta chief Senior-General Min Aung Hlaing’s recent call for face-to-face talks with the leaders of Myanmar’s ethnic armed organisations. Observers worry that the AA chief’s tweet portends a possible resumption of fighting in Arakan State, and it is within this context that DMG sought the views of a handful of political observers.

U Than Soe Naing || Political analyst

Major-General Twan Mrat Naing has warned the deputy commander. His warning is necessary, and an appropriate response, I assume. The regime must be warned like that. Otherwise, they would recklessly do as they wish.

The AA is running its own administration, promoting rule of law and regional development works in northern Arakan State.

Maj-Gen Twan Mrat Naing might be angry [about recent military activities in Arakan State]. So, he responded impulsively.  The wording is harsh. But those [Myanmar military] commanders deserve it. I assume what he has done is right.

Given the situation on the ground, I think he said so out of necessity. He has issued an ultimatum. The regime is doing the opposite while they are talking about peace. That’s why Major-General Twan Mrat Naing has said so, out of necessity. It is also a warning to the regime.

His warning sounds like thunder in the rainy season. Clashes could take place on the ground [following the warning]. It is a consequence of the military regime oppressing the people, destroying stability and undermining trust. This has happened because the regime, while calling for peace, is doing the opposite.

It is important to note that there were no arrests over alleged ties to the AA after the ceasefire [in November 2020]. But lately, the military has started to make arrests again. A man from Taungup and Muslims from Sittwe were detained on suspicion of having ties to the AA. Major-General Twan Mrat Naing said in interviews that there were informal talks [with Myanmar’s military after the ceasefire], but there was no pledge to maintain a permanent peace. The ceasefire was reached through informal talks. So, the Major-General [Twan Mrat Naing] has warned them not to disrupt the prevailing stability.

We don’t know the magnitude of tensions between the two sides. There might be some tensions between the two, and they will know best. But after Major-General Twan Mrat Naing said what he said, it can be interpreted as a challenge. It will also be a cause for concern if fresh clashes occur. No civilian wants to see clashes. Everyone wants to have a peaceful and stable region. His warning is not a good sign, and things could get worse between the two sides. Tensions may grow, and renewed clashes could happen.