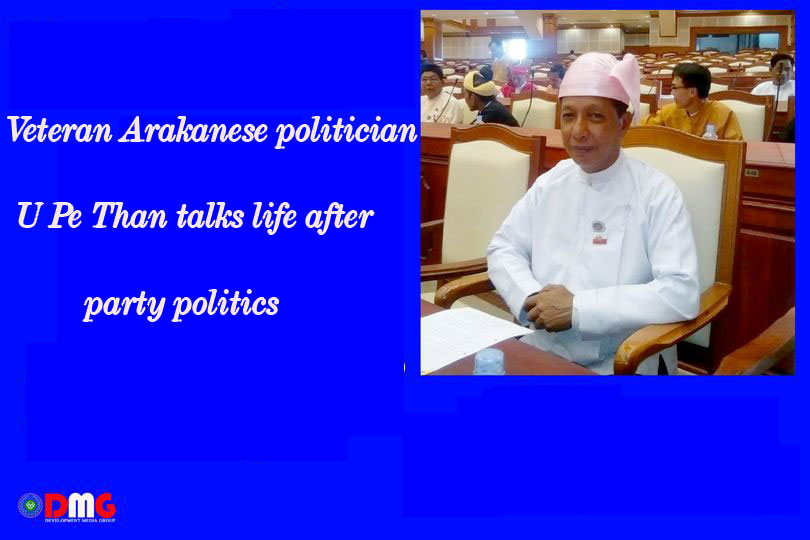 As the Arakan Army (AA) has grown in popularity and prominence in Arakan State over recent years, political observers have posited that its rising profile may have come at the expense of Arakanese political parties’ standing among the public. This notion has gained added currency in the aftermath of the military coup on February 1, 2021, which effectively suspended Myanmar’s democratic reformation for an indeterminate period.

Veteran politician U Pe Than, who resigned from the senior ranks of the Arakan National Party (ANP) last year, recently talked to DMG about the current political landscape.

DMG: Why did you resign from the ANP?

DMG: When you say ‘party politics is dead,’ what do you mean?

DMG: Why has public support for party politics declined in Arakan State?

UPT: Previously, people supported the Rakhine Nationalities Development Party and the Arakan National Party. Later, young people have become more enthusiastic about the revolution of the United League of Arakan/Arakan Army (ULA/AA) than party politics. Party politics has limits. What we want is broader than that. The rights we can enjoy are very limited compared to our ambition.

Young people have become more interested in liberty and restoration of Arakanese sovereignty. They no longer want to rely on parties operating under the 2008 Constitution. We can’t push for our goals by raising questions and submitting proposals [in parliament]. When ULA/AA emerged, people chose armed revolution.

Some people hold the view that lawmakers only take care of themselves and ignore the voters after receiving the votes they need. But it is not the only reason [for voter apathy]. The ULA/AA is another reason. That’s why their interest in party politics has declined and they have become more enthusiastic about taking up arms.

DMG: Do you think right now we’re seeing the downfall of Arakanese parties?

UPT: People have no interest in party and parliamentary politics at all now, either in Arakan State or elsewhere in the country. The military council did not scrap the 2008 Constitution, saying that its takeover was in line with the Constitution. The 2008 Constitution only granted a few rights over the past 10 years of parliamentary democracy, and it cannot pave the way for our hopes. When there was no other choice, people engaged in party politics. People supported Arakanese parties believing that they would at least have a say, gather under the party flag, and raise issues at the parliament. Subsequently, only the ULA/AA could rock the hearts of people like an earthquake.

Revolution is a tough path filled with daunting challenges. However, people have started to fall in love with this path, and more and more people are choosing it. As a people who have lost their sovereignty, the emergence of the ULA/AA fueled the belief that liberty is the only way to regain sovereignty, to have self-rule, to have access to resources produced in one’s own territory, and to be freed from the yoke of others.

DMG: If the military regime holds an election next year, and if Arakanese parties run in it, will they be able to win a majority as they did in past local elections?

UPT: The election may take place if the military council holds it. However, public interest and confidence in it will be extremely low. It will just be an election for show.

There could be a struggle between party politics and armed revolution in Arakan State. And the armed revolutionaries may restrict the election. It is up to the stances of party leaders whether to take part in the election or work together with the ULA/AA to put pressure on the regime. If party leaders decide to run in the election and are satisfied with what they get, they will get nothing more than they got in the past 10 years of parliamentary democracy.

DMG: What kind of competition could there be between a political party and an armed group?

UPT: Under the 2008 Constitution, political parties will have to cooperate with the military council. When that time comes, there may be fissures among the people. Should we rely on party politics or armed insurgency? People may be confused. It may be that people have to decide whether to support the election or not. I say there could be friction and competition depending on whether or not the Arakan Army recognises this election.

DMG: Would you say that you resigned because you were tired of party politics?

DMG: Finally, is there anything else you’d like to add?