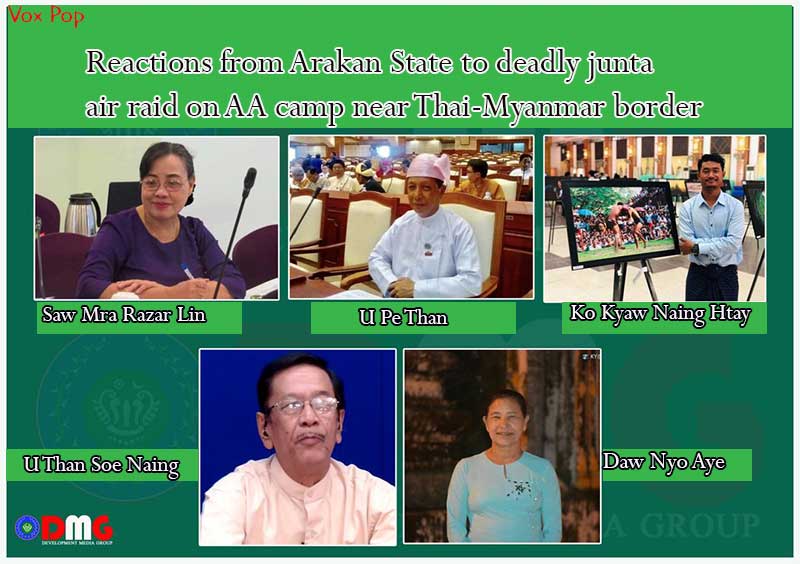 Six members of the Arakan Army were killed when the Myanmar military carried out airstrikes on an AA outpost in territory of the Karen National Liberation Army’s Brigade 5, near the Myanmar-Thai border in Kayin (Karen) State. Some members were also injured, and a handful of buildings in the area were damaged or destroyed. The AA has vowed retaliation for the attack.

In the wake of the incident, and with tensions between the Myanmar military and Arakan Army simmering for weeks, DMG spoke to politicians, activists and political observers about their views on Monday’s fatal aerial assault.

I am very sorry that Arakanese men died. It happened because of war. I don’t want to see the victims and damages of war any more. I want that [ending conflict] to be a high priority. I pray that similar incidents do not happen in the future. My thoughts are with the families of the deceased. Personally, I don’t want to see any fighting.

I feel sorry. The AA said the attack was deliberate. It appears that military tensions will further intensify. The attack is unacceptable. If the Myanmar military considers itself to be a standard army, it should have declared war before launching the attack. As our people died, we have to retaliate. Their attack undermines trust. It is a challenge while we are trying to build trust. Their attack destroys trust.

The attack happened not in a war zone, but far from the war zone. So, it was deliberate, I assume. It is not normal that they carried out an attack outside of Arakan State. According to my understanding, war must be declared [before commencing hostilities].

The attack is the second of its kind. The first attack took place in Laiza [in 2014, when eight AA cadets were killed in a military artillery shelling of a Kachin Independence Army training school in northern Myanmar]. I feel very sorry for them.
They came and attacked all of a sudden, so it is an assassination. As a civilian, I view it as a deliberate attack. It should not have happened. It is unacceptable that the Myanmar military has carried out an attack while inviting the AA to peace talks.

In military terms, this kind of incident can happen when air operations are carried out. Recently, I have heard that junta jets mistakenly dropped bombs and fired guns at their own troops in Kayin State.