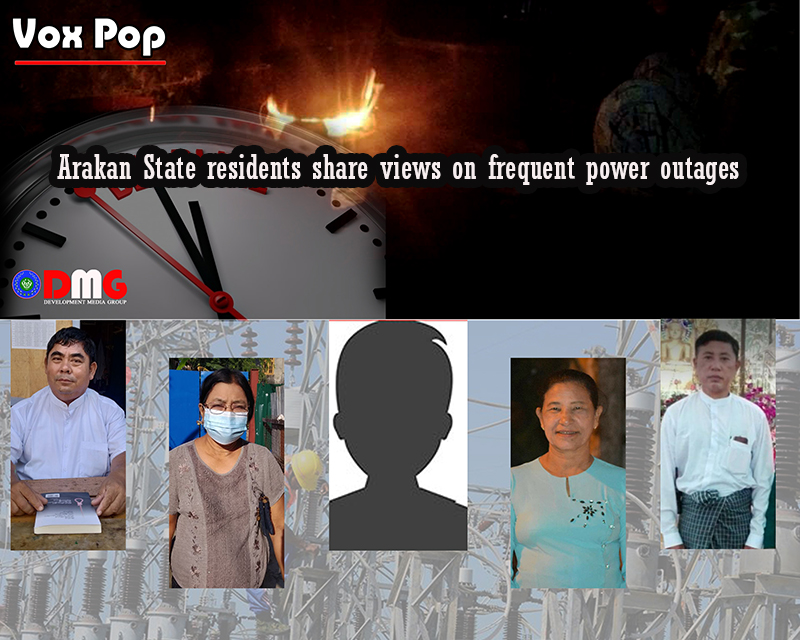 Since the military coup in February 2021, power outages have become a frequent occurrence in Arakan State, and this month, electricity has been out at least twice a day, often lasting for four hours or more.

DMG spoke to local residents about the difficulties they face amid such regular disruptions to the power supply.

If the electricity goes out, it lasts for almost five hours, so there are some people who are inconvenienced. Electricity is important. It’s not convenient to turn on the generator immediately. Now, due to the high price of fuel, if there is a power outage, there are little difficulties like that.

Yesterday, there was a power outage from around 10 o’clock, and it came back around dawn. The authorities distribute electricity, and cut it off. Sometimes the electricity goes out while cooking. At night, electricity is supplied from 11 o’clock. In order to buy charcoal, everyone is in trouble during this period.

People are also insecure due to power cuts. While most people are in dire straits due to rising commodity prices, electricity cuts are common and everyone is miserable. I think everyone has that kind of feeling. Sometimes there is no electricity to heat a kettle to drink a cup of hot water. In my opinion, the authorities are deliberately making people miserable.

In the case of large factories that operate with large machines, there are cases where electricity cuts off and immediately burns, and transformers are damaged. When there is no electricity, it is inevitable that evil activities will appear, which can become a danger to the public. I see that only when the departments openly explain why the electricity is cut off can the public give input.