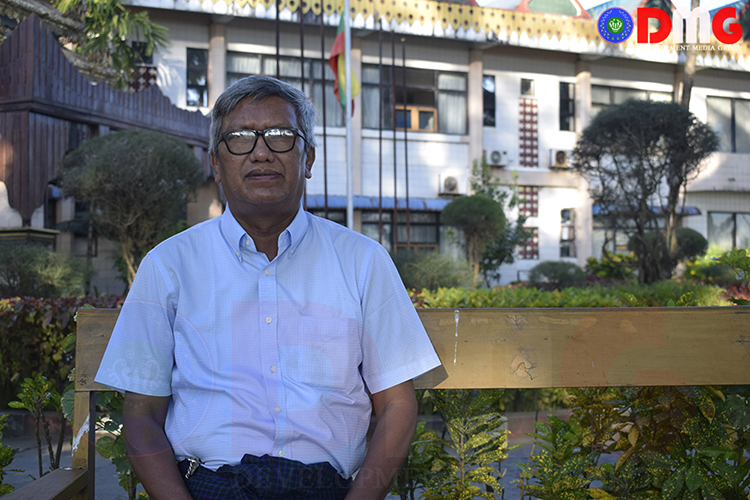 “From my point of view, the charge of high treason is a severe indictment. If the charge is for sedition, it would be enough, I think. Anyway, it is not a good sign appearing as a political prisoner under the civilian government.”

Dr Aye Maung and author Wai Hun Aung were sentenced 20 years imprisonment for sedition and high treason by Sittwe district court. They were imposed a long prison term for giving speeches at a literary forum, fomenting widespread criticism among public. Thet Naing, a reporter from the DMG, interviewed the esteemed political analyst and author Maung Maung Soe regarding the punishment inflicted on the duo.

Q:  Could you tell me your opinion about the long-term imprisonment to Dr Aye Maung and Wai Hun Aung.

A: From my point of view, the charge of high treason is a severe indictment. If the charge is for sedition, it would be enough, I think. Anyway, it is not a good sign appearing as a political prisoner under the civilian government.

Dr Aye Maung has already resigned from the Arakan National Party. But he is still an influential politician among Rakhine people. Sentencing a prominent Rakhine politician amid political tension could lead to social tension in Rakhine State. I think, the negotiation process after lessening these tensions can bring peace and stability to the region.

I think the situation in Rakhine State will be similar. Mitigating the severe punishment for political prisoners and finding a solution through negotiation is the best way to decrease political tensions in Rakhine State.

Q: In your opinion how does the arrest and detention for giving a speech at a literary talk contradict the country’s movement towards democratic path?

A: The country needs to have freedom of expression for any public talks. There are different opinions concerning the actual topic of the talk. So, these types of situations need to remedied with great care and sensitivity in order to prevent undesirable actions from occurring in the future.

Q:  What impacts could result due to the verdict while instability in Rakhine State continues?

A:  Currently, the armed conflict between the Tatmadaw and AA has been intensifying in Rakhine State. Meanwhile, they were imprisoned for political offences. That case could further increase the tension. I think the government should deal with the case politically amid escalating armed conflict.

Q: Do you think there is a potential for bitter relations between the NLD government and Rakhine people because of the verdict?

A: The relations between them are strained now. They have been strained previously. I think the tension is increasing day by day after the NLD refused to negotiate with the ANP majority of Rakhine officials elected.

Q: What subsequent consequences can occur because of the tension between them?

A: They always object all decisions of the union government. I don’t think problems can be handled delicately due to the bitter tension between them.

Q:  We must say there is an upsurge of patriotism among Rakhine people. What consequences can come out following the verdict?

A: It fans the flames of tensions in the region. To prevent bad situations, political action is an absolute necessity. If there is no political action, military affairs will become more predominant.

Q: How should the government handle the case amid a very complicated situation in Rakhine State?

A:  As I said before, they should be charged with the appropriate indictment instead of the charge of high treason.  The NLD government once said that it must speak out if even one political prisoner is in detention. So, it is not good increasing the number of political prisoners during the time of national reconciliation.

Q:  Is there any impact on national reconciliation because of the court order?

A:  Currently, the NLD government should reconsider it because such kind of situations are being seen negatively in ethnic people’s regions.