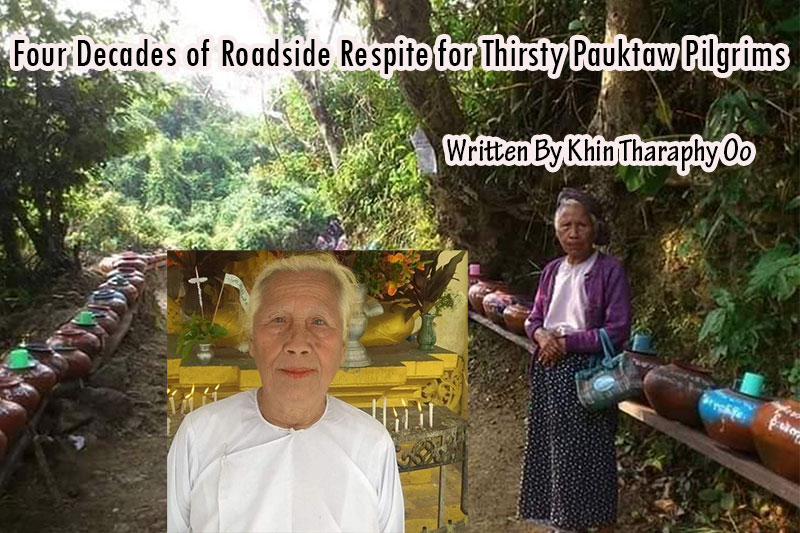 The year is 2018, and more than 500 waterpots are lined up on both sides of the uphill road in Pauktaw Township, Arakan State. A woman in her 80s monitors the pots frequently, to make sure they don’t run dry.

The octogenarian’s name is Daw Dollar Phyu. She was born in Soe Mae Kyi village, Pauktaw Township, where the Sandawshin Pagoda is located.

For more than 40 years, Daw Dollar Phyu and her progeny have been supplying water annually when the Sandawshin Pagoda Festival is held. When she’d think about tired festivalgoers-cum-climbers making the uphill trek to the festival grounds and stopping along the way to drink water from her roadside pots, Daw Dollar Phyu would smile with betel-stained lips and teeth.

Pilgrims have to pass nine peaks on foot before getting to the pagoda, and she places a series of waterpots along the path to the pagoda.

The water donations began more than four decades ago with Daw Dollar Phyu’s husband U Shwe Thar Oo. Although U Shwe Thar Oo died in 2001, his widow continued to donate water yearly during the Sandawshin Pagoda Festival.

Thanks to modern water-piping, the task of supplying pilgrims is easier today than it was when the couple began their water works decades ago.

Daw Dollar Phyu has three children. Her youngest son, Tun Tun Naing, said: “Forty years ago, when my mother started donating drinking water for travellers, pipes were not available in the market yet, so she filled the waterpots by using bottles.”

In the beginning, there were 42 waterpots along the road to Sandawshin Pagoda, but in the last year that the festival was held, Daw Dollar Phyu said the number had reached 520 thanks to an increasing number of donors.

When the annual pagoda festival draws near, her family members help with washing pots, building stands for the drinking vessels, and writing donors’ names on them, said Ko Tun Tun Naing.

The Sandawshin Pagoda Festival is celebrated for eight days, concluding on the Full Moon Day of Nadaw in the Myanmar calendar year. In addition to pilgrims from various parts of Arakan State, Yangon, Mandalay and other parts of Myanmar, the festival also draws some tourists.

In Pauktaw Township, there are three Phayonekar Islands, called East, West and Central. The Sandawshin Pagoda is located on West Phayonekar Island, which is home to ethnic Arakanese and Khami people. Most earn a living from fishing or farming. There are more than 10 villages on the island, including Soe Mae Kyi, Chaung Wha, Yar Tait, Myay Ngu Island, Pyaingdaung and Thit Khaung Daw.

The mountain where the Sandawshin Pagoda is located is called Nilarpabata. It is said that when the Buddha went from Dhanyawadi town to Dwarawadi town, the Buddha took a rest on top of Mt. Nilarpabata, at the mouth of the Kaladan (Kitsapanadi) River, at the request of eight dragons. The Buddha is said to have given four hairs at the site, and the dragons built a pagoda at the top of the mountain to enshrine the hairs.

The pagoda festival was not celebrated in 2019 and 2020 due to armed conflict between the Myanmar military and the Arakan Army, and the Covid-19 pandemic. It was during this two year hiatus that Daw Dollar Phyu passed away, on August 31, 2021, in her home village of Soe Mae Kyi.

Her son Ko Tun Tun Naing said his mother often told them to continue donating drinking water for travellers to the pagoda festival after she was gone.

He tells DMG that he will discuss with family members arrangements for keeping the roadside well populated with waterpots during this year’s and future pagoda festivals, as his mother wished.