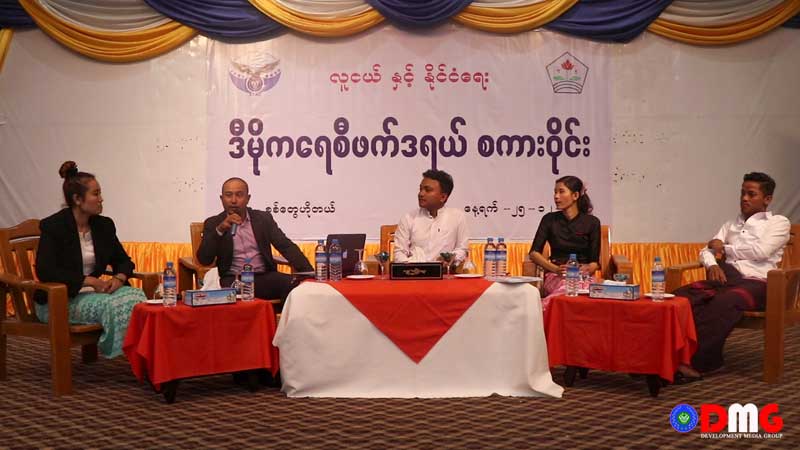 Youth interest in politics in Arakan State is on the rise and young people have high expectations for shaking up the political system, according to Ko Saw Kalayar Tun, a delegate from the Arakan Youth Affairs Committee (AYAC).

“Arakanese youths are said to be interested in politics because they are very hopeful of changing the current political system due to various circumstances in Arakan State,” he said, at the conclusion of a December 25 event headlined “Democratic Federal Talk.” The discussion, which more than 80 local youths took part in, was held at Sittwe Hotel in the Arakan State capital.

Despite many Arakanese youths getting involved in the political arena, cooperation among them still appears to be low, said the chairperson of the Women and Children’s Affairs Committee of the Arakan League for Democracy (ALD), Daw Soe Soe Htay.

“Young people need to earn a regular income to stand on their own two feet. If Arakanese youths want to engage in politics, it may take time for them,” she added. “They must be provided with money. They may suffer emotional feelings and may be influenced by their families. They must be able to overcome these challenges.”

It is up to political parties’ leaders to boost youth participation in politics, and to create better opportunities for young people, Daw Soe Soe Htay emphasized.

While youth interest in politics looks to be rising, women’s participation in the political process remains strikingly low. There are no female MPs in the Arakan State legislature, a stark example of a broader gender imbalance in the nation’s political sphere, observers say.

In a related arena, women’s rights groups have been advocating for a minimum 30 percent female representation in the nationwide peace process. However, that ratio has yet to be achieved: Women’s participation in the first Union Peace Conference in 2016 was 13 percent. The number ticked up to 17 percent in 2017’s Union Peace Conference and increased to 22 percent in the 2018 iteration.