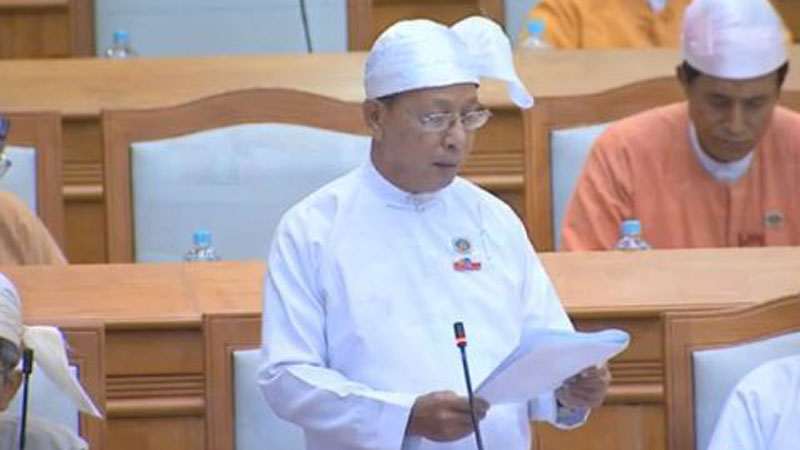 One of Arakan State’s most prominent voices in the Union Parliament weighed in on constitutional matters last week as MPs wrapped up a seven-day debate on proposed amendments to the military-drafted charter.

Among other assertions made by the Arakan National Party (ANP) lawmaker representing Myebon Township in the Lower House, U Pe Than expressed his “surprise and dismay” at lawmakers from the National League for Democracy standing against a proposed amendment to the Constitution that would allow regional legislatures to pick their respective chief ministers. Under the current constitutional framework, chief ministers are appointed by the president.

The proposed change to Article 261 has particular resonance in Arakan State, where the state parliament is the only one in the country where a clear majority from a party other than the ruling NLD was elected in 2015. U Pe Than’s ANP was that party.

“I was very surprised and dismayed by the objections of MPs from the NLD for the amendment, because I steadfastly bear them in my mind as comrades of democracy,” he said.

NLD lawmakers, in rejecting the proposed amendment, said such a change should be preceded by a reduction in the proportion of seats guaranteed to unelected military personnel in legislatures, which stands at 25 percent. The ruling party lawmakers argued that as things stand, giving that power to the regional legislatures would give military MPs a significant say in who becomes chief ministers; possibly even enough votes to pick chief ministers outright in some legislatures where the military-backed Union Solidarity and Development Party performs well in elections, such as in Shan State.

U Pe Than also urged his fellow lawmakers to consider proposed amendments to the charter through the lens of what is in the national interest, rather than self-interest.

“Everybody knows the 2008 Constitution is very difficult to amend,” U Pe Than said, adding that “all MPs need to have goodwill to amend weaknesses of the Constitution.”

A total of 23 MPs discussed provisions and sub-provisions involved in the bill amending the Constitution on March 5, the last day of a seven-day discussion of proposed changes to the charter in the legislature. Votes are scheduled to be held on some proposed amendments on March 10.