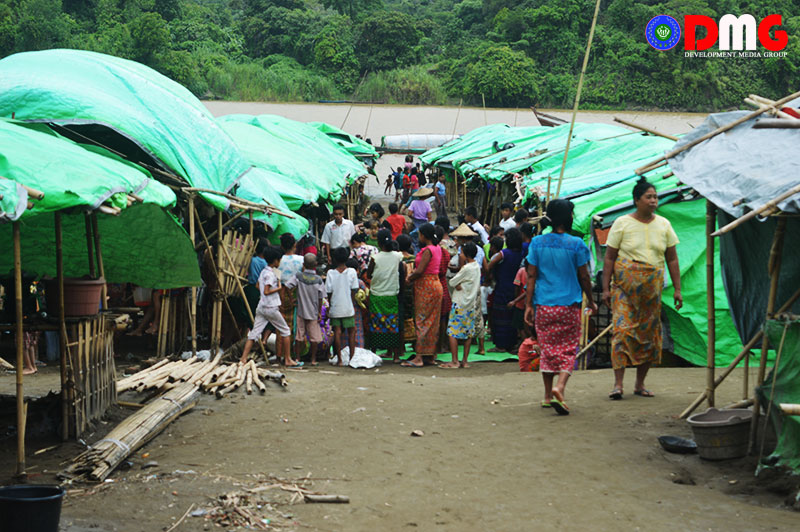 With the government announcing plans to distribute a package of staple food supplies to “people from the basic strata of society without regular income” amid the coronavirus pandemic and as Thingyan approaches, Arakanese civil society organisations have said displaced populations should be among those receiving the assistance.

The government will supply eight pyi of rice (one pyi is equivalent to 2.12 kilograms), 50 ticals (one tical equaling 16.4 grams) of edible oil, 50 ticals of salt, one viss (3.6 lbs) of beans and one viss of onions to each qualifying household.

The list of those who qualify will be compiled by cooperation between departmental organisations, the Union of Myanmar Federation of Chambers of Commerce and Industry (UMFCCI), elders in respective communities, social associations and youth volunteers, the government announced on April 6. The supplies are to be distributed beginning on April 10.

“We think that people from IDP [internally displaced people] camps should be included in the list. If the government supplies refugees, we’re ready to help the government to carry it out,” Ko Zaw Zaw Tun, secretary of the Rakhine Ethnics Congress (REC), told DMG.

U Khaing Kaung San, director of the Wan Lark Rural Development Foundation, also suggested that refugees should be considered for the handout of basic foodstuffs as they are among the people most in need of relief aid in Arakan State.

“Refugees currently need emergency assistance rather than wage earners in cities and rural areas. Whether the government acknowledges it or not, refuge issues matter a lot. They should be considered for the five-item aid [provisioning],” he said.

Regarding whether there is any plan to supply IDPs, DMG contacted U Win Myint, spokesperson for the Arakan State Government, but was told that he was unwell and not available for comment.

The number of IDPs in Arakan State has surpassed 150,000, with many facing difficulties meeting basic needs such as food, clothing and shelter, as well as other daily hardships.