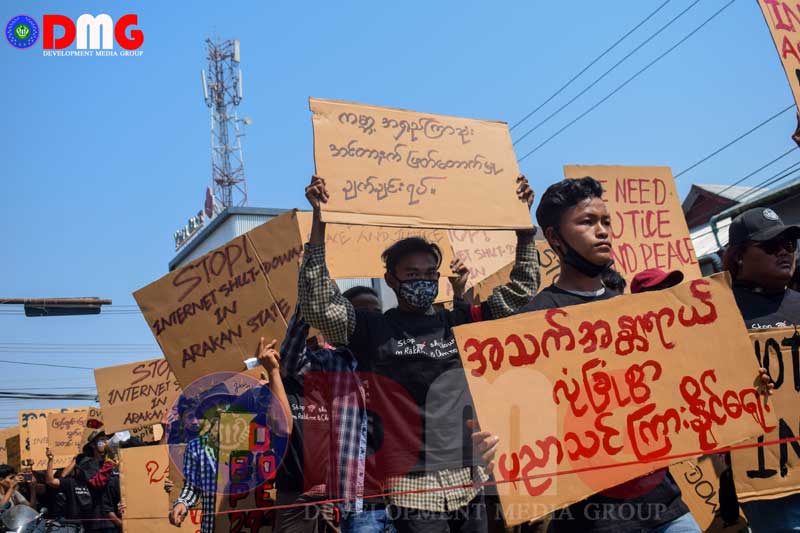 Early this month, the Ministry of Transport and Communications restored mobile internet to the eight townships — but only on a 2G network — more than a year after access was initially blocked. Authorities have maintained throughout the months-long internet blackout that it was necessary to stymie coordination of anti-government forces in the region, which has been plagued by conflict between the military and the Arakan Army since December 2018.

Initial optimism at the restoration of mobile internet this month has given way to frustration as the 2G network that residents have access to is inferior to the link-up enjoyed by the vast majority of Myanmar.

Because internet connections have been too slow, students and parents have reported being unable to see matriculation exam results made available online this year as part of altered procedural arrangements prioritising COVID-19 preventive measures.

The CSOs’ statement said the situation is hardly different than when internet access was denied outright beginning on June 21, 2019.

“Despite the resumption of internet, only 2G internet is available. We can do nothing,” said U Khaing Kaung San, director of the Wanlark Rural Development Foundation, one of the CSO signatories. “The Union government needs to have benevolence. It should behave humanely.”

Although the government officially ended the internet blackout in Arakan State, he said the practical limitations of the 2G network meant freedom of expression and reporting of human rights violations remained hindered.

“During the ongoing fighting period, there are reports of human rights violations and injuries. There are controversies over the fact of which side is doing the shooting. If the internet is fully restored, we can get real-time information easily. That’s why we are pressuring the Union government,” he explained.

Under the current circumstances, residents of the affected townships also still struggle to access information about COVID-19, and the 2G-only access will hamper campaign activities and voter education as Myanmar’s November 8 general election approaches, the statement said.

Fighting between the military and the Arakan Army has escalated in some of the internet-deficient townships since the ban was first imposed, displacing tens of thousands of civilians.

The government initially blocked internet access in Arakan State’s Buthidaung, Maungdaw, Rathedaung, Ponnagyun, Kyauktaw, Myebon, Mrauk-U and Minbya townships, as well as Paletwa Township, in June of last year. The ban was lifted in Buthidaung, Maungdaw, Rathedaung, Myebon and Paletwa townships on September 1, but it was reimposed on February 3 of this year.

Online privileges were restored again in Maungdaw Township on May 2, with the remainder of the affected townships in Arakan and Chin states given access to the 2G network on August 1.

The restoration of mobile internet to the rest of western Myanmar this month followed a dogged campaign by advocates of free expression and human rights, who demanded an end to the prolonged blackout. Several activists have faced legal action under the Peaceful Assembly Law for their protestations against the internet shutdown.