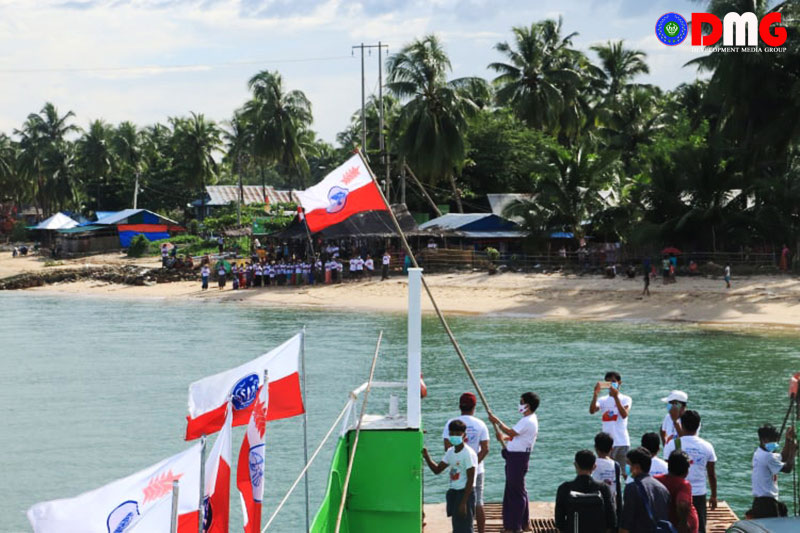 A victory committee for the Arakan National Party is leading a boat canvassing trip through southern Arakan State as the clock winds down to Election Day, with the group arriving in Gwa Township on the evening of October 26, according to ANP candidates there.

The electioneering contingent left Sittwe by Z-craft motorboat on October 24 and will make their pitch to voters in the southern townships of Arakan State over the coming days.

Transportation is currently restricted due to an outbreak of COVID-19 in Gwa and elsewhere in Arakan State. As such, the ANP victory committee’s presence on land was limited. On Monday evening, they offered entertainment and stumped aboard the Z-craft.

“As COVID-19 is still breaking out here, the Z-craft moors at the [campaigning] site, 6 feet from the bank so as not to result in contact among the people,” said U Tin Nyo, the ANP’s Amyotha Hluttaw candidate in Gwa.

Gwa Township is notably the constituency where the current Arakan State chief minister, U Nyi Pu of the National League for Democracy (NLD), was elected in 2015.

The victory committee plans to continue boat-borne campaigning with trips to Thandwe, Manaung and Ramree townships, according to the ANP.

On October 16, the Union Election Commission (UEC) announced that elections would not be held in the entirety of nine Arakan State townships, as well as 15 wards and 137 village-tracts across four other townships in the state.

As the ANP has dispatched its members to southern Arakan State for canvassing in recent days, the party has reportedly drawn crowds of locals in the thousands.

The 2020 general election is slated for November 8 but a majority of Arakan State townships, in the state’s north, will not be allowed to vote.

Though Arakan State is the most heavily affected by cancelled elections, a total of 56 townships nationwide will be unable to vote either entirely or partially this year, including significant patches in Shan and Kachin states.