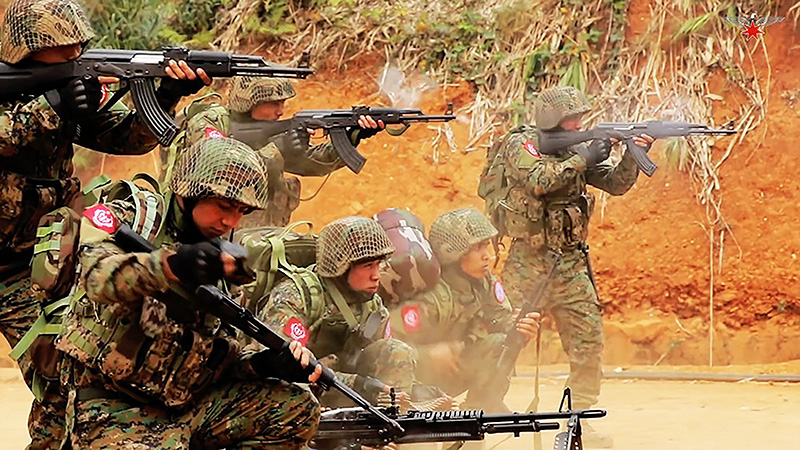 The Arakan Army (AA) has called on the ruling National League for Democracy (NLD) led-government and the Tatmadaw to hold by-elections before December 31 in townships where the 2020 general election has not yet been held.

In a statement on November 12, the ethnic armed group said the Tatmadaw should work with the NLD government in order to end the military operations in Arakan State, declare a nationwide ceasefire and hold by-elections as soon as possible.

“This is a reasonable suggestion to ensure peace and stability in Arakan State. In order for the government’s administrative mechanisms to function properly, the elected representatives in each constituency need to be able to express the voices of the local people. I think such recommendations will contribute much to peace and stability in Arakan State,” said U Kyaw Zaw Oo, vice chairman of the Arakan Front Party (AFP), which won three seats in constituencies that were able to vote on November 8.

The AA statement also expressed the group’s willingness to provide appropriate support to the relevant government agencies to create a stable environment for holding the requested by-elections.

The Arakan Army wants by-elections to be held in good faith so as not to deprive the people of their rights in the townships where voting was not allowed on Sunday, the statement reads.

The Tatmadaw welcomed the AA statement and would coordinate with respective agencies as much as possible to hold by-elections in the areas where the 2020 general election did not take place on November 8, the Tatmadaw True News Information Team said in a statement of its own on November 12.

“It is not enough for the Arakan Army to just make an announcement. The Arakan Army must release the three detained lawmakers,” said Monywa Aung Shin, secretary of the NLD’s Central Information Unit, referring to the abduction of three NLD election candidates in Taungup Township last month.

“Only by releasing the detained candidates will the government and the military recognise these issues and make progress. I believe that progress will be made as requested by both sides if the request is implemented smoothly,” Monywa Aung Shin added.

The failure to hold the November 8 election in most Arakan State townships denied people the right to vote, deprived them of elected representatives and undermined their civil, ethnic and democratic rights, the Arakan Army said in its statement.

The AA’s statement said it was extending a unilateral ceasefire, which was to expire on November 11, to December 31, in order to facilitate the holding of by-elections in areas where voting was cancelled.

U Aung Thaung Shwe, the Lower House MP for Buthidaung Township, described the Arakan Army’s request to hold by-elections as “a must,” but he added that it would be up to the government to make that happen.

“For the time being, the USDP [Union Solidarity and Development Party] and Arakan Army are calling for holding by-elections in townships where the 2020 general election did not take place on November 8, but it depends on the government to do so,” the legislator said.

The European Union, meanwhile, has called for holding by-elections “at the earliest possible” in constituencies where elections did not take place on November 8. Monday’s EU statement was issued by the 27-nation bloc’s spokesperson for foreign affairs and security policy, who said the polls also “mark another important milestone in Myanmar’s democratic transition.”

Citing security concerns, the UEC last month cancelled elections in the entireties of nine townships in northern Arakan State, as well as several wards and village-tracts in Sittwe, Kyaukphyu, Taungup and Ann townships.