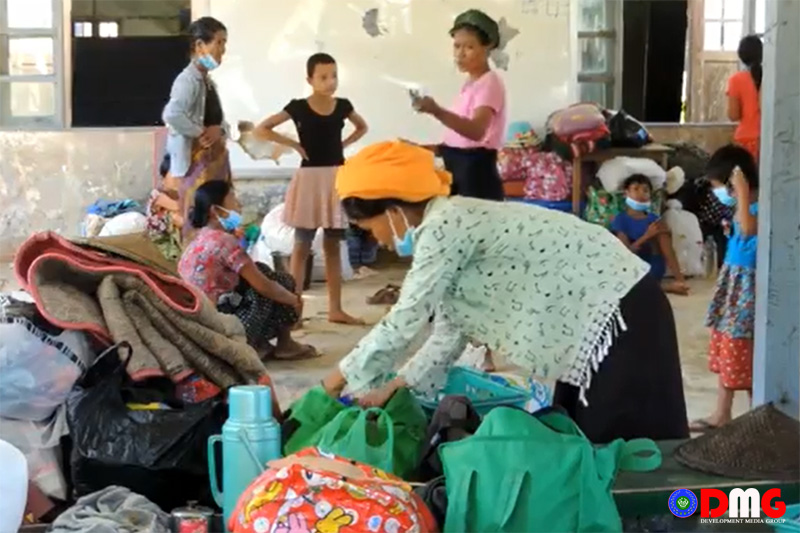 More than 100 people from Zaichaung village in Arakan State’s Kyaukphyu Township were allowed to return to their homes on the morning of November 14 after being interrogated in military custody for over 10 days, according to the villagers.

On November 2, Tatmadaw troops rounded up residents at a school in Zaichaung village, where they were scrutinised for any illegal ties to the Arakan Army (AA), according to locals.

“The Tatmadaw left the village at around 8 a.m., telling residents to stay home and harvest the ripened rice,” said a woman who was subsequently detained and declined to be named for security reasons.

A woman was shot and wounded when the soldiers entered Zaichaung village on November 2, prompting more than 700 residents to flee to downtown Kyaukphyu, while over 100 elderly, women and children were left behind in the village.

Those who remained in the village were detained by the Tatmadaw and allowed to bring food from their homes to cook during their time in military custody, but due to the large population, it was difficult to get enough food, according to the detainees.

“The food from the village was collected and cooked in the school to feed all detainees,” said the woman who asked for anonymity. “The Tatmadaw gave us some food, but it was difficult because there were so many people. When we went to our village to pick up our belongings, we were escorted by three or four soldiers as guards.”

A man detained by the Tatmadaw said he was beaten while being taken by soldiers from his home to the school.

“I was slapped five times on the cheek and beaten with a gunstock. It was so painful that I could not sleep,” the man said.

“The military contingent left the village and freed the detained residents,” said U Kyaw Lwin, an Arakan State MP representing Kyaukphyu Township. “For the time being, the detained locals are in the village. I don’t know exactly as to whether they [the villagers] will come to downtown Kyaukphyu or not.”