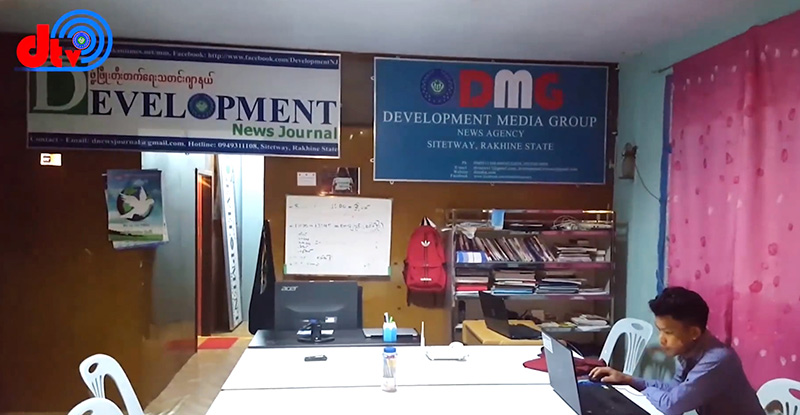 Questions are being raised over a recent case opened against a DMG reporter in Arakan State who is being charged with defamation under the Telecommunications Law in connection with a recently published article, instead of first resorting to the News Media Law for resolution.

“It is as if a case is being filed against us because of hate toward us. We published the story in accordance with media ethics, so we don’t understand why such a case was filed against us,” said U Aung Marm Oo, editor-in-chief of Development Media Group (DMG).

Engineer U Maung Win from Road/Bridge Special Group (4) filed a lawsuit against Aung Kyaw Min aka Kyaw Myo Aung at the Maungdaw Myoma police station earlier this month under Section 66(d) of the Telecommunications Law, alleging defamation on the erroneous premise that the story in question misquoted him.

Under the headline “Soonest repair needed at Maungdaw 3rd-Mile Bridge,” the article was published on the Facebook page and website of DMG on December 11.

U Aung Marm Oo said he had heard that the case was filed by U Maung Win at the behest of the Arakan State government.

Aung Kyaw Min was questioned at the Maungdaw Myoma police station on December 14 and was released on K500,000 ($370) bail.

Aung Kyaw Min, a Maungdaw-based DMG journalist who stands by his story, said the lawsuit against him is a threat to truth-seeking.

“The government seems to be cracking down on our journalists and the prosecution is a threat to the truth,” he said.

DMG phoned the head of the Maungdaw Myoma police station, Police Captain Ye Naing Tun, seeking comment on the case, but he could not be reached.

DMG has faced legal action previously, in a case that remains open. Sittwe Special Branch (SB) police filed charges against U Aung Marm Oo under Section 17(2) of the Unlawful Associations Act on May 1, 2019. He has been on the run since May 2019, and almost 20 months later, the charges against him have not been dropped.

If action is to be taken against a member of the media, in accordance with the 2014 News Media Law it is necessary to first file a complaint with the Myanmar Press Council (MPC).

The law states, “If any of the responsibilities or ethics required in Article 9 are considered to be breached by a News Media worker, the aggrieved department, organization or individual shall have the right to complain to the council first.”

Ko Wunna Khwar Nyo, editor-in-chief of Western News, said the recent lawsuits against journalists in Arakan State are a source of concern for local reporters.

“We are concerned for our safety. There are only three media outlets in Arakan State. Reporters in Arakan State are increasingly concerned about the local government’s threat to prosecute under Section 66(d) of the Telecommunications Law,” he added.

Maung Saungkha, director of the free speech advocacy group Athan, criticised the prosecution of journalists as deliberate, saying the local government should monitor them.

“I think the respective local governments should monitor these lawsuits. It is a shame that it is being pointed out by international and local civil society organisations. We think suing over trivial matters is a major obstacle to democracy,” he said.

Under the National League for Democracy (NLD) government, about 50% of all lawsuits against journalists have been filed under Section 66(d) of the Telecommunications Law, according to Athan.

“The government should stop litigating and amend the Telecommunications Law as soon as possible to prevent such lawsuits in the future,” Maung Saungkha said.

The December 11 news story about the bridge in Maungdaw was based in part on an interview willfully given by the complainant U Maung Win. DMG has demanded that the case be withdrawn, saying that at no point did the article misquote or misattribute any of the cited individuals.

DMG is also insisting that the complainant first take his grievance to the Myanmar Press Council, which is empowered under the News Media law to arbitrate in such circumstances.