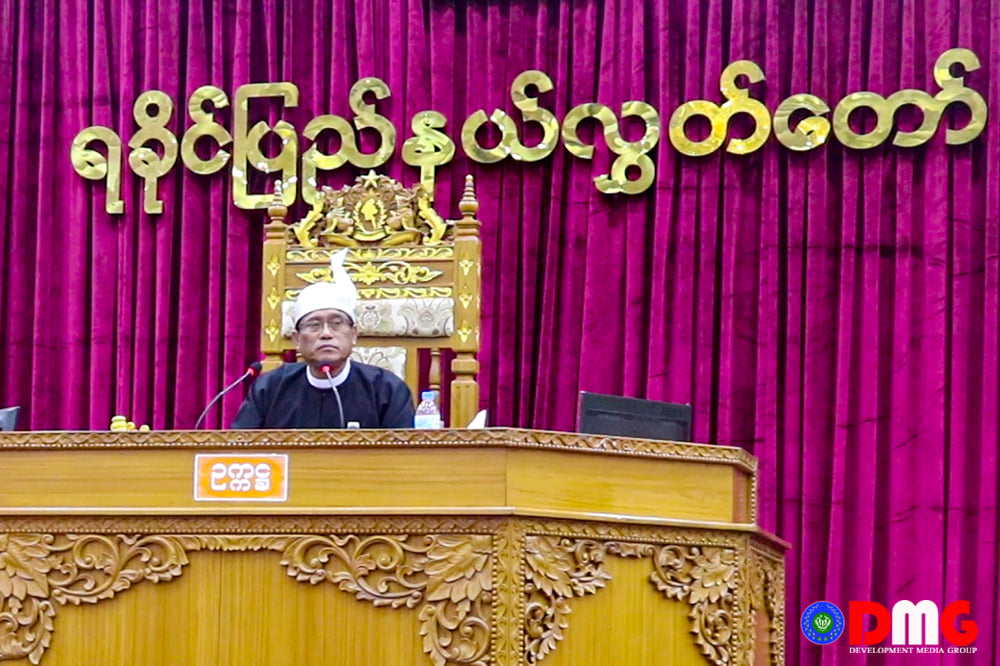 Local governments, the Tatmadaw and the state legislature are taking joint steps for peace in Arakan State, said U San Kyaw Hla, Speaker of the Arakan State parliament.

The Arakan State assembly approved all three proposals submitted by parliamentarians in the closing days of the 15th regular session of the second Arakan State legislature.

U San Kyaw Hla said that all three recent proposals were unanimously approved as they truly represented the people.

This was stated by the Speaker of the Arakan State legislature during his address on the last day of the second Arakan State assembly.

For the past five years, the Speaker of the state parliament has received a monthly salary of K3 million, members of the State Hluttaw, K500,000, the chief minister K3 million, and ministers K2 million, but they need to consider whether they have fulfilled their duties, he said.

“We will soon have to leave this position. But we need to think about whether we have done our duty. There is no one in this meeting room who can give a thumbs-up as to who is doing what. Therefore, I would like to urge you [the lawmakers] to continue to engage in non-lending and non-subsidised political activities to pay off our debts,” he said.

As a result of the 2020 general election, the Arakan National Party (ANP) won seven seats in the Arakan State parliament, while the National League for Democracy (NLD) won five seats, including the Chin Ethnic Affairs ministerial post. The Arakan Front Party (AFP) won two seats and the Union Solidarity and Development Party (USDP) won one, for a total of 15 elected seats.

The next, third Arakan State Hluttaw will have 15 elected legislators and five military representatives.

“The average age of the 15 members of parliament is 48. Therefore, we hope that the Arakan State assembly, which will be formed with a large middle class, will be able to serve more than us now,” he added.

In the second Arakan State Hluttaw after the 2015 general election, there were 22 elected lawmakers from the ANP, nine legislators from NLD, three parliamentarians from the USDP and 12 military representatives, for a total of 47 members.

The first regular session of the third Arakan State legislature will be held on February 9, when the elected lawmakers will be sworn in, including the election of the Speaker and Deputy Speaker of the Arakan State assembly.