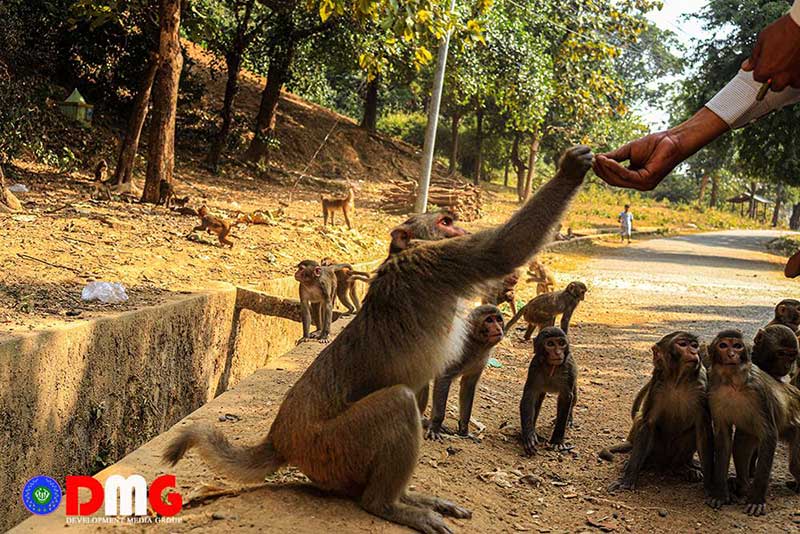 Facing famine, moneys living on Thaylar Giri Mawra Patta Mountain, a famous pilgrimage site in Arakan State’s Kyauktaw Township, are being forced down the mountain where they can be found asking for food from passers-by, according to the local pagoda board of trustees.

There was plenty of food for the monkeys when the area was stable as they were fed by large numbers of Buddhists visiting the pagoda, also known as Kyauktaw Mountain Pagoda, daily. However, monkeys have been facing near starvation since fighting in northern Arakan State made it impossible for local Buddhists to make pilgrimages.

Monkeys down from the mountain are congregating to beg for food from passers-by on the Kisspanadi Bridge spanning the Kaladan River.

“The starving monkeys eat anything they can find, including grass. Sometimes, they could not find anything edible. So, they go down to the bridge and ask passers-by for food. And some have died after being hit by cars,” said trustee U Aung Tun Mya.

Monkeys also suffered when the state government imposed COVID-19 travel restrictions. As monkeys are dependent on pilgrims for food, they face starvation when there are no visitors, said Daw Thein Yi, who sells monkey feed at the mountain.

“They grabbed monkey feed from us. They also stole rice and paddy from houses. As there are no visitors, they are starving,” she said.

The pagoda has, however, started to receive some visitors with Myanmar’s military and the Arakan Army (AA) observing an unofficial ceasefire since November, and the monkeys are receiving some food as a result.

According to locals, there are about 1,000 monkeys on the mountain.