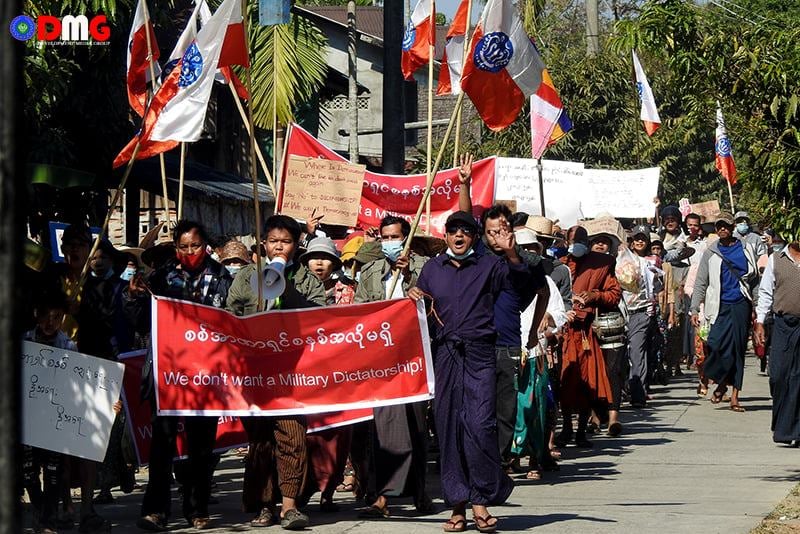 A total of 77 Arakanese civil society organisations released a statement on March 21 demanding the immediate release of those detained for protesting against last month’s military coup.

The Tatmadaw seized power on February 1, forming the State Administration Council as its governing body and forcibly cracking down on civilians protesting the putsch.

The Assistance Association for Political Prisoners said 247 people were killed and 2,345 were arrested, charged or sentenced as of March 20.

“I feel sad that the death toll is increasing. We will object if a government is doing wrong. ... I want to see the detained people to be released immediately,” Daw Nyo Aye, chair of Arakan Women Network, told DMG.

She also urged an end to the deadly crackdowns on unarmed protestors.

U Myat Tun, executive director of the Arakan Human Rights Defenders and Promoters Association, said: “The coup military fired teargas bombs to disperse unarmed people. Then they shot at people with rubber bullets, and fired live rounds, resulting in deaths. I think such violent crackdowns should not happen.”

The CSOs’ statement said they recognised the right to self-determination based on the federal democractic system that the people wish to achieve, and demanded that the Tatmadaw relinquish power immediately.

Eleven Arakan Students’ Unions on March 21 also released a statement denouncing those who are working with the Tatmadaw-led State Administration Council as apostates and “loathsome creatures.”