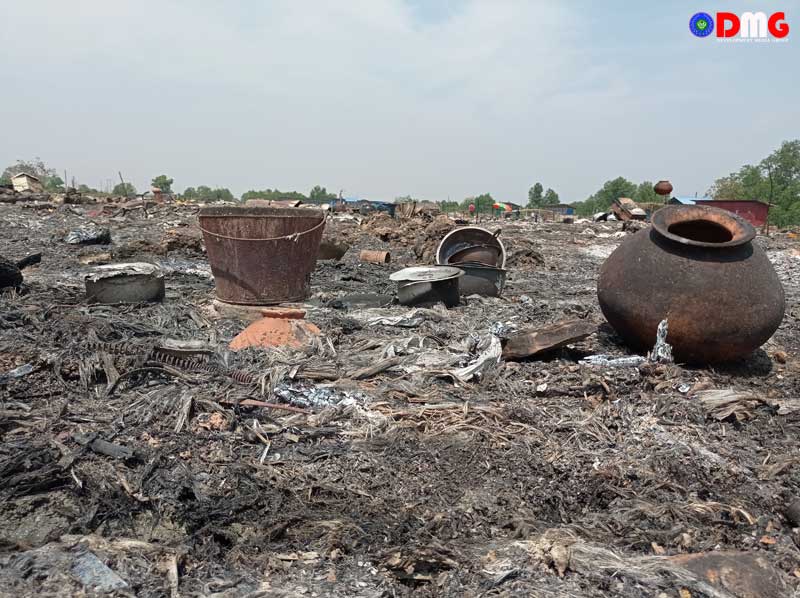 New shelters are being built at the Tin Nyo camp for internally displaced people (IDPs) in Arakan State’s Mrauk-U Township after hundreds of shelters were destroyed in a fire on March 17, according to the camp manager.

Over 660 temporary homes were reduced to ash in the fire, which affected more than 2,500 IDPs at the camp.

The Arakanese writer Wai Hun Aung and friends have donated K20 million ($14,200) for the construction of about 100 replacement shelters, said camp manager U Soe Naing.

“We will have three huts built today to calculate the average cost per hut,” U Soe Naing said on Monday.

Due to limited funds, fire victims will have to draw lots for the new houses.

“We will give 100 huts by lot. We have 20 million kyats in our hands. We will calculate the unit cost of huts and if the winners want to build the houses by themselves, we will measure the land plot and give them the money so that they can buy wood, thatch, bamboo and so on,” said U Soe Naing.

Cash contributions will be solicited to build houses for the remaining fire victims, he added.

Daw Aye Khaing Nu from Bu Ywet Ma Nyo village said: “So, we will have to draw lots. But if I don’t win, I will have to continue to stay at Tin Nyo Monastery, where I am staying now. We still can’t return home. We are concerned not only about accommodation but also about food.”

Tin Nyo IDP camp provides refuge for 3,355 people from 875 households, meaning more than two-thirds of the camp’s population lost their shelters in the March 17 fire.

Following the blaze, the military-led Arakan State Administration Council said it would not rebuild shelters for IDPs at Tin Nyo camp, and urged the IDPs to return to their home villages.

But due to the risks of landmines and troop deployments in their villages, most IDPs have chosen to remain at the camp. The fire victims are currently sheltering at Tin Nyo Monastery.

Over 230,000 people in Arakan State were forced from their homes during two years of conflict between the Tatmadaw and Arakan Army, while tens of thousands have returned home as clashes have ceased since November. Currently, around 180,000 people remain in IDP camps, according to the Rakhine Ethnics Congress.