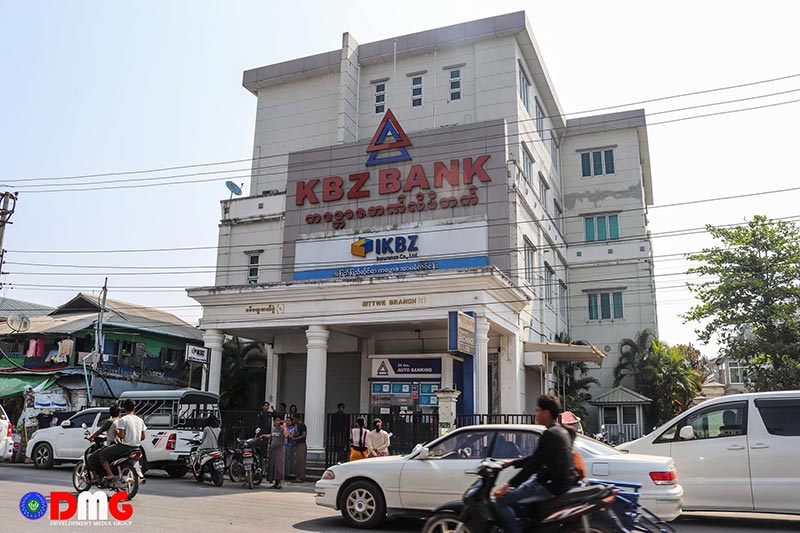 Customers say they are facing difficulty transferring or withdrawing money at private banks in Sittwe, Kyauktaw, Mrauk-U, Minbya and other townships in Arakan State.

Many are queuing at banks from morning to closing time in the afternoons, seeking to withdraw or transfer their money to no avail despite waiting for hours, a resident of Minbya told DMG.

“I have to take out my money at KBZ Bank because I deposit my money there. It doesn’t matter if I have to queue for a long time, but they limit the number of people who can take out money. So we have to seek to get the service first,” he said.

Ko Zaw Tun, a resident of Mrauk-U, said: “We can get banking services at Global Treasure Bank and KBZ. And we have Wave Money service. If we want to withdraw money from an account, we can get the service once a week and the withdrawal is limited to no more than K500,000.”

“Additionally, a total of 20 customers can withdraw money a week. So, there are about 300 customers who want to withdraw their money, but the bank limits the number of customers, so we face difficulty,” he added. “Most people have to return home without getting a chance to take out money after waiting for a long time.”

DMG phoned the manager of the KBZ Bank branch No. 2 in the Arakan State capital Sittwe seeking comment on the reported difficulties withdrawing or transferring money, but he referred the query to the lender’s head office. Several DMG phone calls to the head office went unanswered.

Since the early days of the military’s February 1 coup, the stability of Myanmar’s banking system has been a concern, with political turmoil begetting economic upheaval and raising doubts about the financial fortitude of the nation’s private lenders. The junta has repeatedly sought to provide assurances to the public, which is increasingly wary of depositing money given the imposition of withdrawal limits and reports of ATMs running out of cash with regularity across the country.