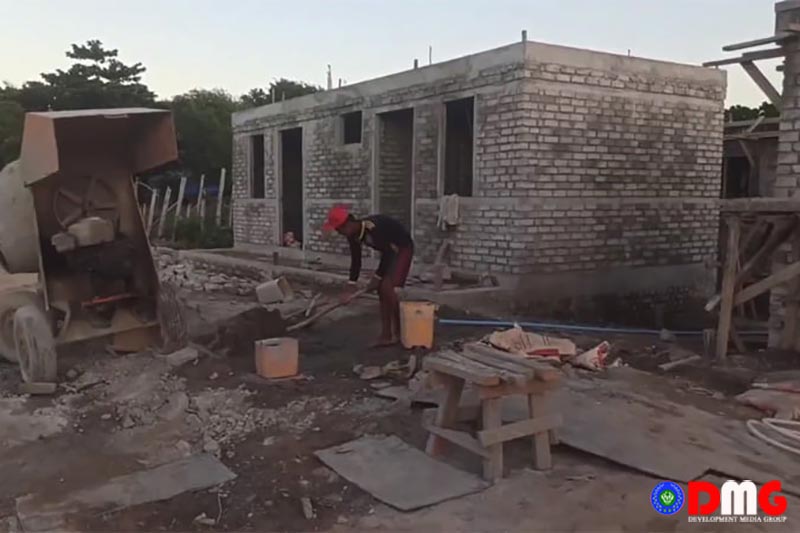 Developers in Arakan State say they have faced difficulties due to the country’s faltering financial system and rising construction materials costs.

The prices of building materials that must be imported from overseas have increased due to the value of the kyat falling against the US dollar, and it is also difficult to withdraw money from banks for business use, said developer Ko Ye Htet Naing.

“As it is not like the situation under the previous government, we don’t know where we can submit a letter to withdraw cash for business use. And, we cannot withdraw cash through a cheque as much as we wish. So, we’ve faced difficulties paying salaries and buying construction materials. As a result, construction work has been delayed,” he explained.

Currently, the price of iron rods used in constructing buildings has surged by 30% and there is a shortage of cement on the market, said Ko Ye Htet Naing.

Developer U Sein Aung said he has faced work delays due to the rise of construction materials’ costs and is uneasy about withdrawing cash from banks in amounts that might be required.

“It has been two weeks that I cannot withdraw cash from the bank. I have heard that companies have faced difficulties due to delayed banking processes,” he said.

Rising costs for construction materials are affecting not only Arakan State but rather are being felt across the country, said U Tin Aung Oo, chairperson of the Arakan State Chamber of Commerce and Industry.

“Building materials have to be imported from abroad. Prices have spiked due to the dollar’s increasing value and having difficulties in importing,” he said.

Developers said they have faced difficulties finishing their tender-won construction projects in time due to delays in banking services.

U Aung Thein, chair of the Arakan State Developers’ Association, said they submitted a letter to the Arakan State military council two weeks ago demanding that the matter of increasing construction materials’ costs be addressed; that they be informed of how the council plans to make cash withdrawals for companies more convenient; and that the deadlines for tendered projects be extended.

The letter has not yet elicited an official response.

“We submitted a letter as well as discussed with them in person regarding difficulties that we have faced. They told us that they would reply after their cabinet meeting. We haven’t seen any action so far,” U Aung Thein said.

Although the Central Bank of Myanmar has announced that businesses are allowed to withdraw up to K20 million a week, it has been about two weeks that businesses have not been able to withdraw cash from Myanma Economic Bank in the Arakan State capital Sittwe, according to developers.