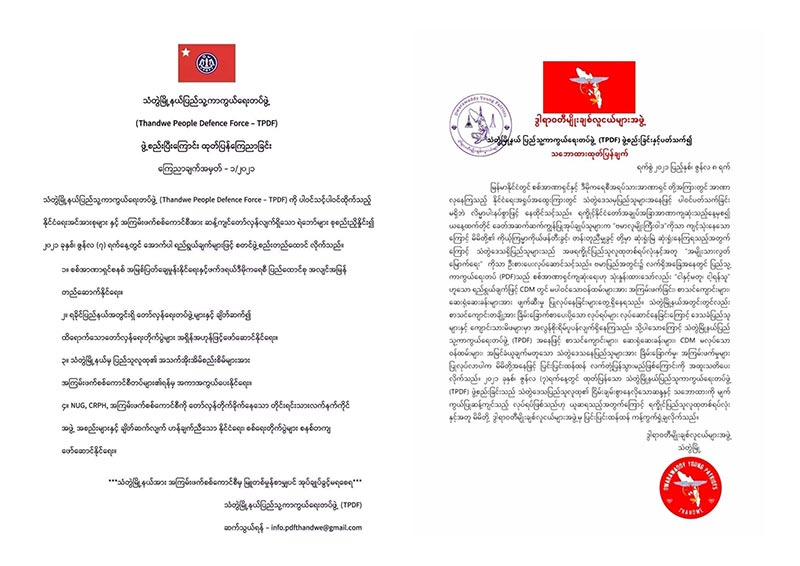 The recent formation of a Thandwe People’s Defense Force (TPDF) has been met with local disapproval in Thandwe Township, Arakan State, where the group described its origins as resulting from a joining of “political forces and comrades” opposed to Myanmar’s military regime.

A statement released by the TPDF on June 7 called for effective efforts to overthrow the military dictatorship and establish a federal democratic union.

In order to protect the lives and property of Thandwe Township’s people, the TPDF statement said it would work with the National Unity Government (NUG) and the Committee Representing Pyidaungsu Hluttaw (CRPH) to establish a balanced political and military battle plan with those ethnic armed groups also fighting regime forces.

However, some Thandwe residents and local civil society organisations have said the TPDF statement does not represent the whole of Thandwe Township.

“I think the formation of the TPDF is just the creation of a riot in Thandwe Township. Who was informed to set up the Thandwe People’s Defense Force? Who contacted NUG and CRPH? I have never heard of such groups in Thandwe Township,” she said.

Ko Sein Chit, executive director of the Arakan Social Network in Thandwe Township, said the TPDF was not needed due to the differences between mainland politics and the political environment in Arakan State.

The Dwarawadi Patriotic Youth Group issued a statement on June 8 condemning the formation of the TPDF, saying its creation ignored the wishes and attitudes of the local people in Thandwe Township.

The Dwarawadi Patriotic Youth Group has stated that it will retaliate if the TPDF commits acts of violence against staff not participating in the Civil Disobedience Movement (CDM) at schools, hospitals and places elsewhere employing civil servants.

U Aung Kyaw Soe, a Thandwe town elder, asserted that the TPDF did not represent local people in Thandwe Township.

“There is peace and stability in Arakan State for the time being. The TPDF was formed by a group of like-minded people, and I think that could lead to even bigger problems. At present, everything is fine with the local people and the government,” he said.

Security has been tightened in Thandwe following the announcement of the TPDF’s formation.

Following the Myanmar military’s February 1 coup, the NUG announced the formation of “People’s Defense Forces” to oppose the junta by force of arms, protect civilians from military abuses, and as a precursor to the eventual establishment of a Federal Union Army.