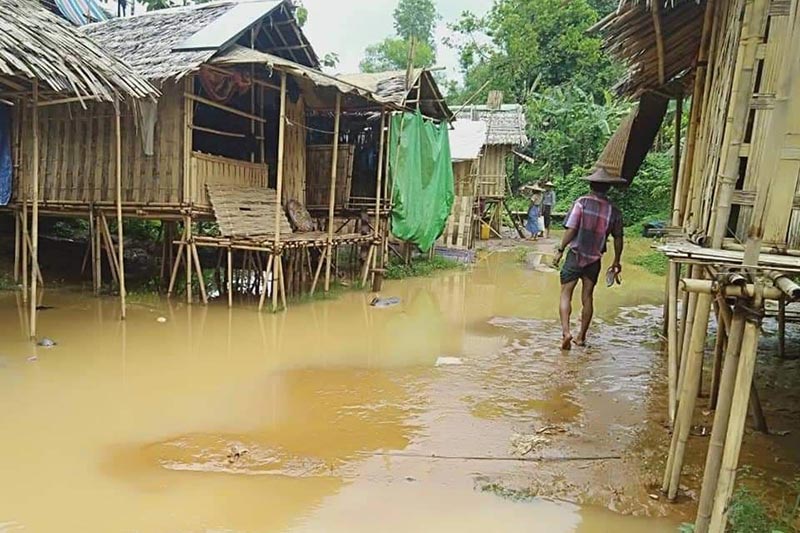 Some camps for internally displaced people (IDPs) are facing housing difficulties due to incessant rains in Arakan State, according to camp officials.

An IDP camp opened at Kawi Yadanar Monastery in Kyauktaw’s Pyi Taw Thar ward was flooded due to heavy rains and the IDPs are reportedly facing many difficulties.

U Saw Nyunt Win, a resident of Tinma village who currently lives in the IDP camp, which is located in the compound of Kawi Yadanar Monastery, said the IDPs were having difficulty finding food and shelter.

“Now the IDP camp is flooded and we cannot go outside. The water was so strong that I could not go downstairs at all. And there are buoys in the water and all the firewood is wet. There are many difficulties in finding food and shelter in the IDP camps,” he said.

More than 1,300 people from the villages of Tinma, Hnamada, Marlar, Montthantpyin and Laungshae are currently taking refuge at the Kawi Yadanar Monastery IDP camp.

Ko Ann Thar Gyi, who is assisting the IDPs, said the same situation is playing out at Thaykan IDP camp in Minbya Township.

“On the Minbya side, the IDPs are having difficulty finding a place to live due to heavy rains in Thaykan IDP camp. We are working to build tents in consultation with camp officials. The roofs of the tents were bad, and the rain was leaking in,” he explained.

The Rakhine Ethnics Congress (REC) is compiling a list of IDP camps that are currently inundated by heavy rains.