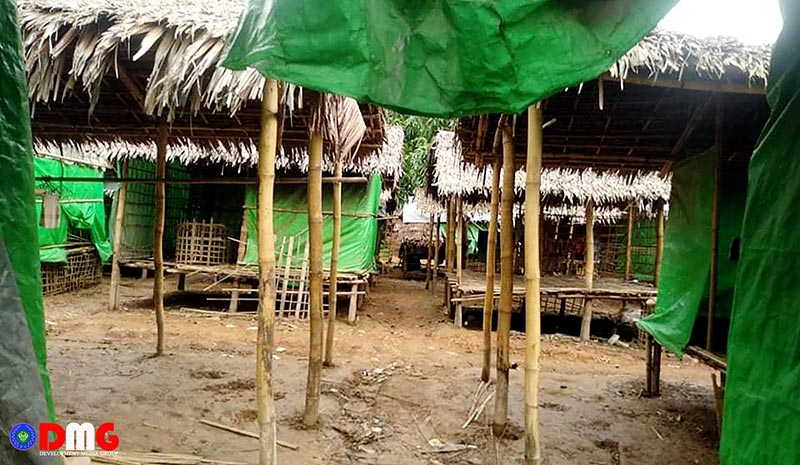 With no donors for nearly a year, emergency assistance has been needed for internally displaced people (IDPs) at Wah Taung IDP camp, which is located near the banks of the Lemro River in Minbya Township, as IDPs have faced difficulties during the monsoon season, according to camp managers.

About 160 IDPs from several villages in the region are sheltering at the camp.

Because Wah Taung IDP camp has existed since 2019, temporary tents at the camp offer increasingly run-down shelter for their inhabitants, said Sayadaw U Ottara, manager of the camp.

“As these tents were made of bamboo and timber, both good and bad timber might be included. The roofs have been damaged also,” he said. “We cannot rebuild them currently. We can only do it when organisations donate for repairs. The UN has currently provided tarpaulin and rope, but we don’t have other necessary things such as timber and bamboo.”

IDP Daw Ma Yin Nu said their temporary shelter had been damaged, and sharing tents with other IDPs during the monsoon season was causing difficulties.

“Our tents have been damaged now as they were built two years ago. Currently, we have no donors and have to stay at others’ shelters. Sharing tents with other IDPs in the monsoon season has caused difficulties. [For example], a family has to wait to cook until the other family finishes cooking. And, we have faced difficulties sleeping as space is not enough,” she said.

IDPs said only the Ministry of Social Welfare, Relief and Resettlement provides for Wah Taung IDP camp monthly, and they do not get support from other donors and organisations.

“When the Ministry of Social Welfare, Relief and Resettlement supports with rice, we have to go to Thay Kan village or An Thar village or Minbya town to get it,” said Sayadaw U Ottara.

“They don’t come to us. It is reportedly said that this region has been specified as a restricted area. We heard about it via our [former] donors. We heard that although some organisations want to donate, they do not dare to come due to the restrictions. I think they are worried because if they came here, authorities would know it.”

U Maung Tin Win from Ka La Ma Taung village in Minbya Township said as donors cannot come to them, IDPs have to go out to cut their own wood, buy kitchen items and do other necessary things.

“We’ve been provided rice only. We have to go out to work as we don’t have oil, salt, onions, et cetera. We have no regular work,” he said. “We cut bamboo or wood, and sell it. We earn about K10,000 after working for one or two days. It is not enough to send our children to school as we have to use a boat and fuel prices are expensive.”

There were more than 200,000 IDPs in Arakan State at the peak of the two-year conflict between the Tatmadaw and Arakan Army (AA), with many having returned to their homes since a cessation of hostilities in November 2020. Currently, more than 100,000 IDPs are sheltering at displacement camps, according to the Rakhine Ethnics Congress.