Patients and oxygen cylinders were evacuated to safer locations due to flooding at Thandwe District Hospital in Thandwe Township, Arakan State, on Tuesday morning and cremations were delayed after the township cemetery was inundated by heavy rains.

“The hospital has been submerged by floodwaters since this morning. Now the oxygen cylinders are being moved,” said a nurse on duty.

Due to heavy rains in recent days, the water level in Thandwe Township has exceeded the danger level, and about 90% of the township has been inundated, according to local residents.

“All the [water level] danger marks erected by the meteorology department have been surpassed in Thandwe,” said U Tun Thant Kyaw.

At present, patients at Thandwe District Hospital are being relocated to other places where floodwaters have not yet reached, said Ko Tun Thant Kyaw, a volunteer from a Thandwe civil society group involved in Covid-19 protection and prevention.

“The patients are currently being transported to the hospital’s tallest ward for medical treatment. The water is rising and not falling. As such, it is also a concern for patients,” he added.

Some Covid-19 patients are also being treated at Thandwe District Hospital. As of July 26, there were 68 confirmed coronavirus patients in Thandwe Township, according to the Arakan State Department of Public Health. 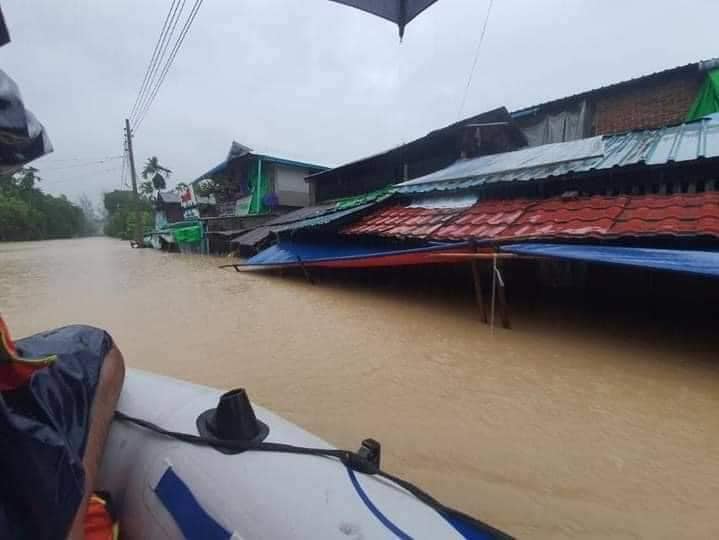 Arrangements have been made for the bodies of two Covid-19 victims who died on Monday in Thandwe Township to be cremated somewhere other than the township cemetery, which has also flooded.

“The bodies of the two who died yesterday have yet to be cremated because the crematorium is inundated. We have asked the Mya Pyin crematorium in Ngapali to help cremate the bodies,” U Tun Thant Kyaw told DMG on Tuesday.

The bodies were taken by boat from Thandwe District Hospital on Tuesday to Mya Pyin crematorium, some 6 miles away.

In addition to most of the neighbourhoods in Thandwe being flooded, electricity has been cut off since Monday evening after a power plant there was inundated.

Flooding has also been reported in Taungup, Gwa, Kyaukphyu and other townships in Arakan State. The floods have reportedly caused power outages in some of the affected townships, including Thandwe.