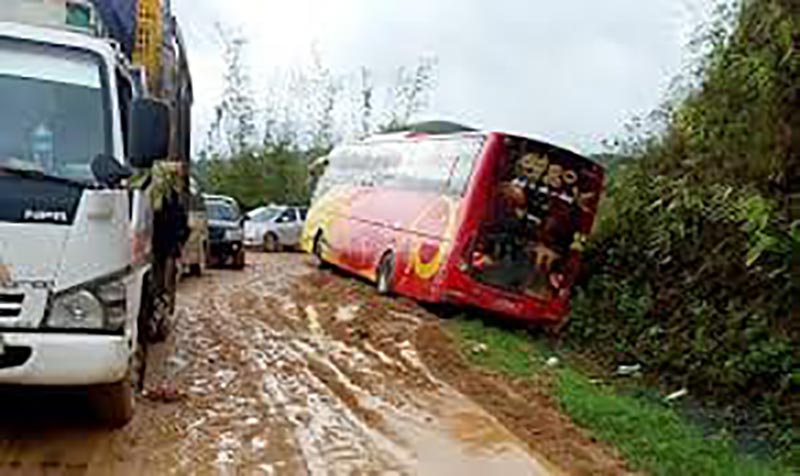 Drivers say the Minbu-Ann road, the busiest thoroughfare for transporting goods from mainland Myanmar to Arakan State, is congested every year during the rainy season.

These drivers say the annual traffic jams are due to the fact that the roads are not repaired before the monsoon season, and rather are only repaired when heavy rains require it.

“During the rainy season, there are roadblocks every year. In the summer, we have to repair the road in the rainy season, so the road slips when it rains,” said Ko Win Hlaing, a truck driver who plies the route between Mandalay and Sittwe.

The Minbu-Ann road is one-way at points, so drivers often have to wait for traffic heading in the opposite direction to pass before continuing on, according to drivers.

U Maung Win Chay, an official with the Kathi Oo bus line, said the sides of the road were part of the problem.

Due to heavy rains in Arakan State over recent days, more than 100 passenger buses, trucks and vans were stranded due to a landslide between Ngapye village and Taungsauk village in Ann Township.

“The car was stuck in the mud and could not go because it was slippery. Vehicles have been stuck since yesterday, but now some drivers have been able to get around with the help of others,” said U Kyaw Kyaw Lwin, a driver from the Arkar Tun bus line.

U Tun Aung Kyaw, an engineer from the Roads and Bridges Department in Ann Township, said the vehicles heading to Magway Region’s Minbu were now able to travel and that other vehicles would be allowed to do so.

When asked by DMG how to solve the annual traffic congestion problem, U Tun Aung Kyaw said he would call back later because the traffic was congested.