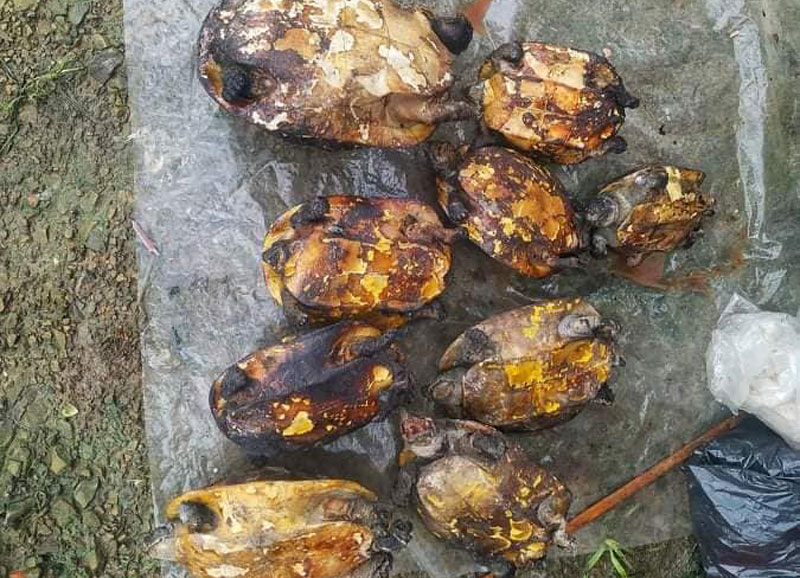 As the killing and selling of turtles has been reported at markets in Mrauk-U town, Arakan State, authorities on August 30 warned over loudspeakers at the markets that those found to be illegally poaching turtles would be sentenced to three to 10 years in prison.

A responsible person from the Forest Department in Mrauk-U Township said the killing and sale of protected wildlife was punishable with prison time under Section 19(a) of the 2018 Conservation of Biodiversity and Protected Areas Law.

“Maybe they don’t know it. So, they sell turtles. We’ve warned them not to kill and sell turtles as well as other wild animals. We also warned people not to buy and eat turtles and to be kind to them, and that if turtles continue to be killed, they could become extinct,” said the responsible person.

If turtle poaching continues unabated, they could be made extinct in the next 20 to 50 years, said Daw Kalyar, regional representative of the Turtle Survival Alliance.

“The turtles we’ve seen at the markets are 25 to 30 years old. If people eat such turtles, it will be difficult for turtles to get to such an age. If turtles are killed and exported like that, they will be extinct in the next 20 and 50 years, according to the scientific evidence,” said Daw Kalyar.

“Turtles are extremely rare in Arakan State now. It is very good if species in the region are protected according to the law, because turtles regulate the energy flow of the environment,” she added.

Those who kill, sell or eat completely protected species are subject to a minimum of three years in prison and a maximum of 10 under the Conservation of Biodiversity and Protected Areas Law.

Those crimes, when committed against normally protected wild animals, are punishable with imprisonment for a maximum term of five years, or a fine ranging from K300,000 to K1 million, or both. Those who kill “seasonally protected” wild animals out of season will be fined from K70,000 to K200,000.