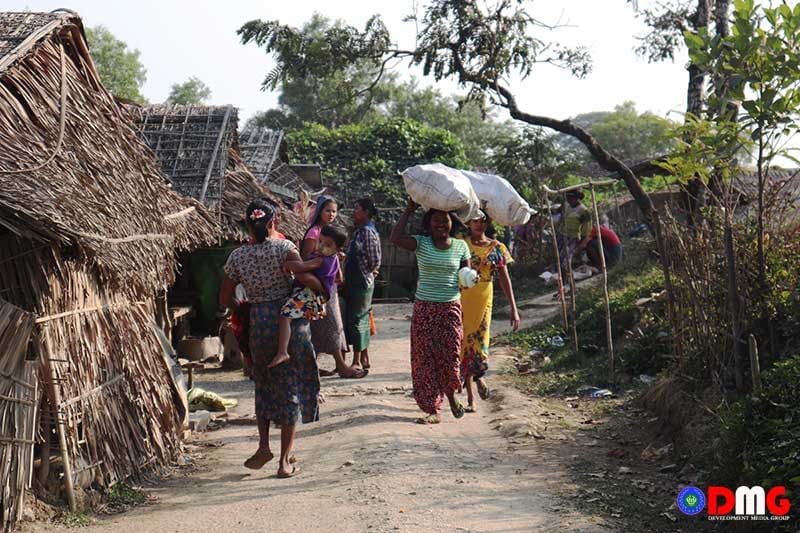 With no clashes between the Myanmar military and Arakan Army for some 11 months, tens of thousands of internally displaced people (IDPs) have returned home, but many are finding it difficult to make ends meet.

With farming, bamboo harvesting and fishing off-limits or limited due to fears of landmines, livelihoods are at stake.

It has been about two months since he returned home, but U Tun Hla Kyaw said he continues to face various difficulties.

“When I arrived in the village, my money ran out because I had to repair my house. There are no job opportunities in my village,” said the returnee to Ngasayine Kaing village in Kyauktaw Township. “Fearing the dangers of landmines, we did not dare go to the mountains to collect vegetables and cut bamboo. This is the reason why we are facing livelihood hardships.”

U Sein Kaing said returnees to Likwi village in Kyauktaw Township were unable to farm and found it difficult for their families to survive without readily available food.

“We returned to the village because of the difficulties in the IDP camp, but when we returned, there were no jobs. I wanted to grow monsoon paddy, but I could not due to lack of seeds,” he said.

U Maung Hla, a resident of Thein Chaung village in Kyauktaw Township, told DMG that the government has said it would provide three months’ food supplies and that the World Food Programme (WFP) has also pledged support with cash assistance for IDP returnees, but that they had not received any cash aid for two months.

“We returned home in accordance with the local government’s instructions,” he explained. “When we returned home, we were given a bag of rice and 500,000 kyats [$274]. The government has said it will continue to provide food for three months once we reach the village. WFP has said it will continue to provide 100 percent support to returnees as they have no jobs, but so far nothing has been provided.”

Some IDPs have reported returning home due to fears of Covid-19 infection and a shortage of donors at displacement camps, as well as livelihood difficulties among the displaced.

“We are concerned about the dangers of landmines in some areas where the returnees live. We are worried that if they come back unsatisfied for some reason, they will not be able to return to the IDP camps,” Ko Zaw Zaw Tun, secretary of the Rakhine Ethnics Congress (REC), told DMG earlier this month.

Ko Zaw Zaw Tun also said locals in areas affected by landmines and other legacies of the conflict in Arakan State should not return to their homes for the time being.

More than 100,000 IDPs have returned home since fighting stopped with an informal ceasefire toward the end of 2020, most of them from Kyauktaw, Mrauk-U and Ponnagyun townships, with smaller contingents from Buthidaung, Rathedaung and other townships.

There are still more than 90,000 IDPs who were displaced by the conflict in Arakan State, according to figures compiled by the REC.